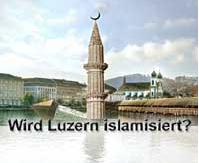 “An overwhelming rejection of the ‘minaret initiative’ would serve as encouragement to all Muslims in Switzerland.

“And treating Swiss Muslims as respected and loyal residents would enhance openness and mutual trust in the country.

“It is crucial to continue to cultivate a tolerant, multicultural and multi-confessional society, which would act as the foundation of our shared future. Swiss society as a whole would come out the winner.”

Emir Cengic reports on the referendum over the proposal to ban the construction of minarets in Switzerland, to be held later this year.