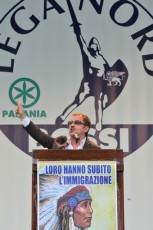 A controversial mosque in the Italian city of Milan is to be shut down, the country’s right-wing government says.

The Jenner mosque attracts about 4,000 Muslims each week, with Friday prayers often spilling out on to the street. Now, after years of complaints from local residents, Italian Interior Minister Roberto Maroni has said he will close the mosque by August.

Mr Maroni, who belongs to the anti-immigrant Northern League, has said he will press ahead with plans to close the mosque, and that anybody found praying in the street will be issued with a ticket.

The local Muslim community is being offered the use of a nearby stadium, in which the Beatles once played. However, the council has said it can only be used four times each week and that each person will be charged on entry.

The president of the mosque, Abdel Hamid Shaari, has said he is happy to pay rent but that its members “won’t be treated like nomads”. “We are Milanese and we are not going to accept the solution that’s being offered,” he said.

The Catholic church has come out in support of the Muslim community. The Roman Catholic priest in charge of inter-faith relations in Milan, Monsignor Gianfranco Bottoni, said that only a fascist or populist government would resort to such dictatorial methods as closing a mosque.