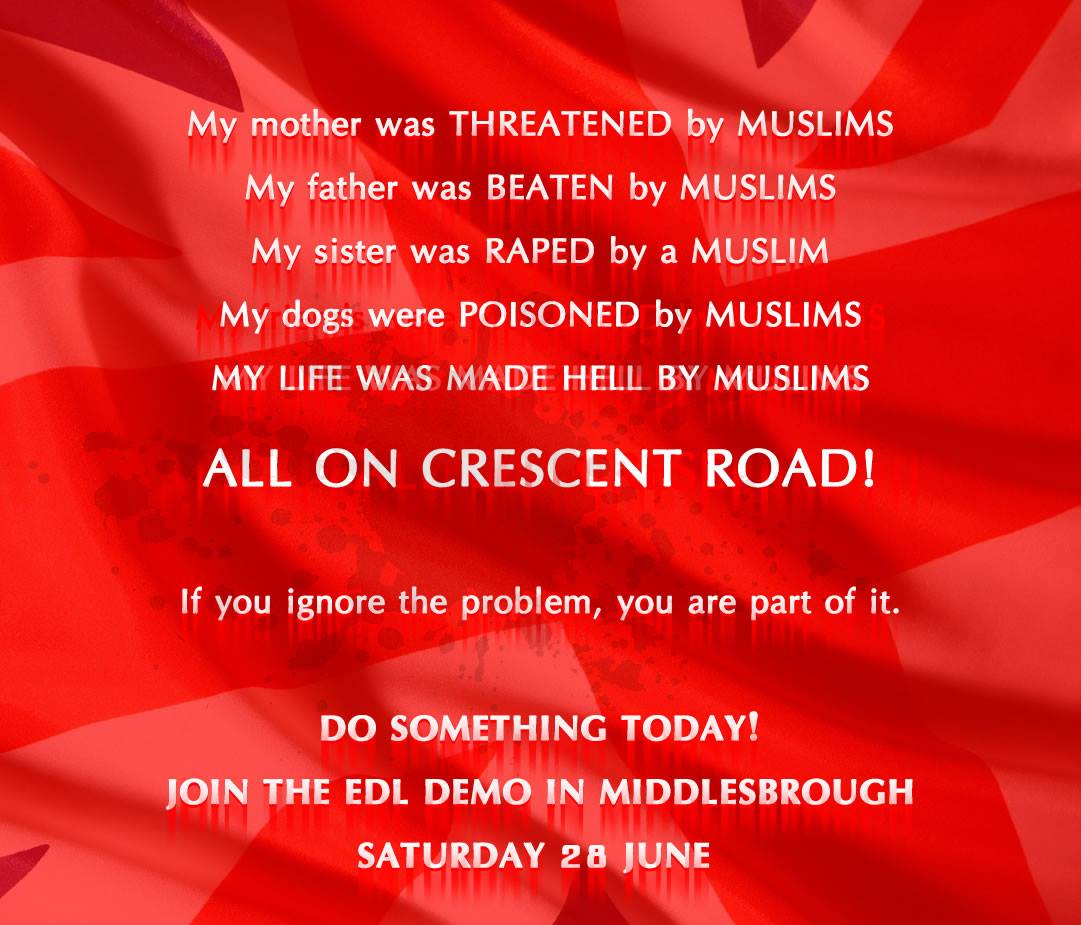 Police have warned that any anti-social or criminal behaviour linked to a planned English Defence League demonstration will be dealt with “robustly”. It comes as hundreds of demonstrators plan to march through Middlesbrough later this month.

Cleveland Police officers are in talks with a number of groups over plans by members of the EDL from as far afield as London and Scotland to gather in the town on June 28.

About 250 EDL supporters have already confirmed they are attending on Facebook – with organisers saying full details of the demo will be released “at a later date”. It is understood that they may try to march through residential areas, finishing at the war memorial on Linthorpe Road. It comes after a recent demonstration in Newcastle city centre in which Teesside flags could be seen.

Counter demonstrations are also being planned by groups opposed to the EDL.

Cleveland Police Superintendent Mark Thornton said: “A representative of the EDL has made contact with police informing us of their intention to gather in Middlesbrough later this month and we are in dialogue with them. Groups have a lawful right to gather or protest in a peaceful manner and Cleveland Police will plan for and try to facilitate such events.

“We are aware that other groups have expressed their intention to gather and express their own views that day however, as yet, no representatives have come forward to give police a clear indication of their intentions for that day.

“Finally, we are in contact with a number of community groups from across Middlesbrough to reassure them of our commitment to the day passing off peacefully, without incident, and with minimal disruption to residents of and visitors to Middlesbrough.

“I would stress that anyone coming to Cleveland with the intention of taking part in anti-social or criminal behaviour will be dealt with robustly.”

John Bloom, a spokesman for Teesside Solidarity Movement, which is calling on Teessiders to stand against the EDL march, said: “We are asking the real decent people of Middlesbrough and Teesside to come out and to stand with us instead on the 28th. Let’s show those who want to divide us, by race and by colour that we will have none of it. Ours will be a celebration together of what’s good about Teesside folk, standing together against the racism.

“Boro folk are not black and white. We are all colours and creeds together, just Boro folk trying to get along and making a life together. Middlesbrough is a town that was built by incomers, the Irish who built the docks, the Scots who came to work at the steelworks, the West Indians and Asians who came to work in our health service. On the 70th anniversary of the D Day landings, we are reminded of the price that we pay, when we allow people to try to set us apart from each other by race and religion.”

Mr Bloom said the details of the solidarity parade were being finalised.