Social media erupted after the mother of a tenth-grader used Facebook to voice her concerns about a world history assignment in which students were asked to explain Islam as if they were speaking to third-graders, Fox 17 reports.

The furor over the lesson plan at Jenison High School began when a concerned mother, Jeannette Hall, posted the following on Facebook: 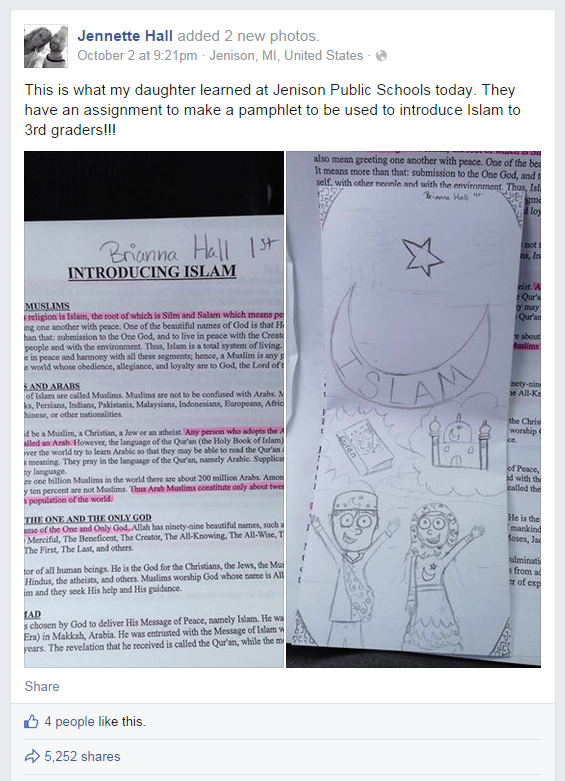 Hall’s initial post misidentifies the point of the assignment, which was not to teach actual third-graders about Islam, but to synthesize information learned in class in a manner that could be taught to hypothetical third-graders.

Her confusion is, perhaps, understandable, given her further complaints on Facebook, including one in which she asks, “I can’t comprehend why prayer is not allowed in school, but teaching (any) religion is? What happened to separation of church and state?”

“By requiring my daughter to make a pamphlet promoting another god, they are violating my religious beliefs,” she continues. “Also, they are presenting false information about who Allah is. They are using subjective language by describing his names as ‘beautiful’. That’s an opinion! In my opinion, it’s SICK and twisted!”

She later clarified what the purpose and objectives of the assignment were, but still insisted that it was offensive:

Jenison High School Principle Brandon Graham – who is meeting with Hall tomorrow to discuss her concerns about the assignment – told Fox 17 that the problem with her post is that, “unfortunately, a lot of times in today’s society, information is spread very quickly without maybe knowing all the facts.”

“The assignment was to cover the five major world religions: the religions included Christianity, Judaism, Hinduism, Buddhism, and Islam,” he continued. “In our social studies classes, we certainly study all those religions to learn how a people, group, and culture function. It helps us understand culture.”