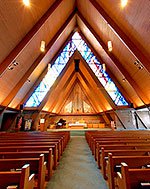 The word seemingly came out of the blue:

Choral director Jeffrey Cobb told his singers and orchestra – roughly 180 local adults and teens drawn from college, a high school, and churches – that a pastor barred an Islamic prayer from the piece they planned to sing.

Their concert was to be performed the next day, on Veterans Day, at First Congregational Church in Traverse City for the annual Mel Larimer Concert Series.

Pastor David Walls and other church officials wanted nothing to do with the Islamic Call to Prayers portion of the performance. They did not want to offend their congregation and military veterans they planned to honor that day, church leaders said.

A shock wave rippled through the choir during their tune-up at the church, and no one took the jolt harder than Alya Nadji, 16, a Muslim and member of the Traverse City West High School Chorale.

Alya tried to keep singing, but couldn’t compose herself. She ran to the bathroom sobbing. She sent a text message to her parents and asked them what she should do. They decided she should leave the rehearsal.

“I felt like I wasn’t being treated equal … I felt that I was unwelcome and that I didn’t belong any place near there,” said Alya, a junior, who wears a head scarf in the Islamic tradition.

The church’s decision to ban the prayer sparked protest by choir and community members. Northwestern Michigan College officials held an impromptu meeting hours before Sunday’s concert and said the college would withdraw as an official supporter of the Larimer event.

Walls, First Congregational’s senior minister, said he and other church leaders rejected the prayer because they did not want to offend audience members.

“We were concerned that there was potential that some of our active military personnel, military families with sons or daughters in Iraq, who have even lost their lives there, would find it much too hard to handle,” he said.

“A prayer in Arabic, addressed to Allah, with references to Muhammad for an event that was intended to honor veterans,” Walls said.

Northwestern Michigan College issued an admirably firmstatement condemning the decision and announcing that it planned to hold a special presentation of the mass including the excluded Adhaan section. Unfortunately, the college administration has had second thoughts. See “NMC reverses plans to hold choral performance”, Traverse City Record-Eagle, 18 November 2012

The piece that was censored, The Armed Man, is by the Welsh composer Karl Jenkins, who was once a member of the jazz-rock group Soft Machine.