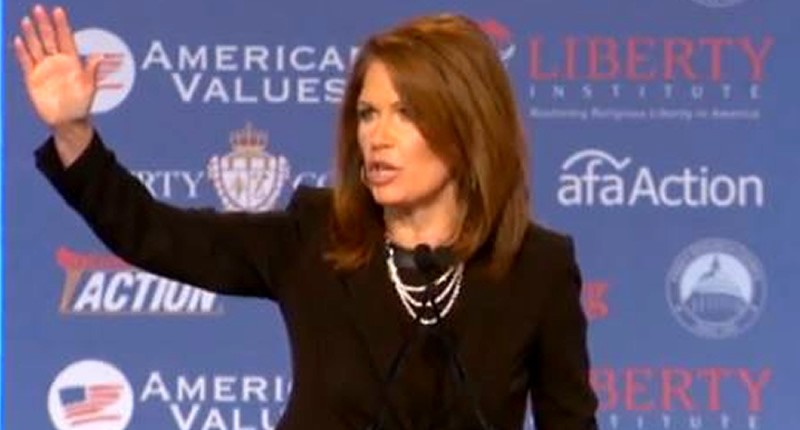 At the 2014 Value Voters Summit, Minnesota Representative Michele Bachmann (R) claimed that there is no such thing as “moderate” Islam, and that President Barack Obama failed the American people by deciding not to declare war on it.

Speaking of her appointment to the House Permanent Select Committee on Intelligence, she claimed that she “had a front-row seat to a world set on fire,” she said, “from Islamic jihad. And what we’ve seen is one disaster after another for the Obama-Clinton policy team.”

“In their fantasy world, being a smaller, diminished, less-powerful United States is somehow supposed to bring about global tranquility.

“Nothing will change the world more than your foolish lifting of sanctions on Iran as they are racing to complete nuclear weapons – and they will,” she said to Obama, “if you stay the course.”

“Unbelievably, we have the first anti-Israel president in American history,” Bachmann said, continuing to address the absent Obama. “That’s your legacy!”

“It’s no wonder Hillary Clinton couldn’t think of an answer when asked on her book tour to name her greatest accomplishment as Secretary of State,” she continued. “Well I have one – permanent retirement!”

“Quite simply, because she basically fails to inspire confidence in just about anything, and don’t forget – she’ll be Barack Obama’s third and fourth term as president.”

Bachmann bemoaned “the rise of radical Islamic jihad – though that’s redundant,” she said, conflating all forms of Islam with its most radical elements, much like Oklahoma state senator Mike Bennett did last week.

She claimed that Muslims are engaged in “spiritual warfare, and that what we must do is defeat Islamic jihad. Sadly, our president has the wrong prescription. He even fails to acknowledge their motivations for bringing out jihad.”

“Yes, Mr. President, it is about Islam!” she said as the audience applauded wildly.

“And I believe if you have an evil of an order of this magnitude, you take it seriously. You declare war on it, you don’t dance around it. Just like the Islamic State has declared war on the United States of America.”

“We’re going to have to answer to the next generation – why we failed to defeat the totalitarian evil of our day.”

“Here is the ugly truth” about moderate Muslims like the Syrian rebels the president considered arming, she added. “They will never be vetted. And they certainly aren’t all moderates. Nearly half of the Syrian rebels we trained have already taken up the cause of Islamic jihad. Half! So why in the world are we giving them American weapons?”