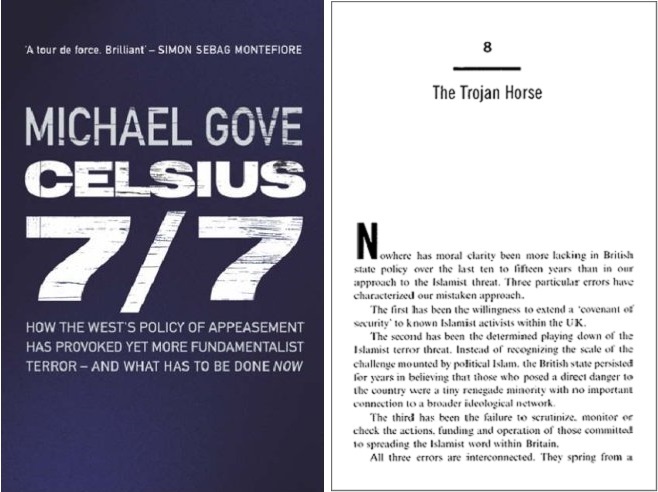 Michael Gove has ordered snap investigations into Muslim schools in several cities around England, widening the focus outside of the so-called Trojan Horse allegations of an Islamist plot involving state schools in Birmingham.

At least five independent Muslim schools in Leicester, Bradford and Luton are said to have been visited by Ofsted inspectors at the request of the Department for Education in recent weeks, raising concerns among Muslim educators that they are being targeted in the wake of the Trojan Horse affair.

The snap inspections of the schools – including the Olive Tree primary school in Luton, which saw a confrontation between Ofsted staff and parents unhappy at the questioning of their children regarding homosexuality – appeared to be triggered by media reports of comments by head teachers or governors at the schools.

An inspection of the Alaqsa primary school in Leicester followed recent media reports of a booklet written 20 years previously by the school’s founder and head teacher, Ibrahim Hewitt, that detailed the punishments under Islamic law for adultery and acts of homosexuality. Hewitt said the inspectors arrived for a single day, and told the school that it didn’t teach enough Christianity or respect for other cultures.

“Commissioners was the word they used, sent by the DfE, without any explanation. We weren’t given any reason for them being there. They just turned up at the door, no notice at all. It was a very unpleasant experience,” Hewitt said. “It was awful. It was very clear that no matter what we said or tried to do, we weren’t going to get through.”

“It’s an attack on a lot of very good work to get Muslims involved in education for their children, raising standards, over 20 or 30 years. They are just trying to discredit all of that. Other people are telling me the same thing,” Hewitt said.

Hewitt’s writing, What Does Islam Say?, was a 64-page booklet published by the Muslim Educational Trust, and intended as a general introduction to the teachings of the Qur’an. As well as discussing the religion’s position on homosexuality it also deals with topics such as racism, abortion and HIV-Aids. Hewitt said the book was intended as an educational tool for Muslims and those who wanted to learn about Islam, and wasn’t applicable to a British context.

The Rabia Girls’ and Boys’ School in Luton – an independent school with 300 5-16 year old pupils – is said to also be among those inspected, as well as two further independent Muslim schools in Bradford and Leicester.

Sir Michael Wilshaw, the chief inspector of Ofsted, confirmed that last week’s inspection of the Olive Tree school was ordered by the government and involved “the publicly expressed views of a member of the school’s senior leadership team” – believed to be comments about homosexuality made in an interview last year by Abdul Qadeer Baksh, the school’s head teacher who is also president of the Luton Islamic Centre.

Qadeer Baksh’s comments were made last year in a panel discussion with Tommy Robinson, the former leader of the English Defence League, on a local BBC radio station. In a portion of the interview that remains online, Qadeer Baksh says that in an “ideal” Islamic state, homosexuality would be punished with death.

But Qadeer Baksh – who is a frequent commenter in the media, and recently condemned the murder of Lee Rigby in Woolwich – also said in the discussion that Islamic law “was not for this country”, and said it would be “absolutely absurd” to have similar laws in Britain. Following the interview Qadeer Baksh tweeted: “I don’t hate gays, I don’t want them punished, I simply related punishment for homosexuality in an Islamic state.”

Wilshaw defended his inspectors questioning of Olive Tree school pupils as young as nine years old on their attitudes to homosexuality.

“Given the specific nature of the concerns in this case – including the publicly expressed views of a member of the school’s senior leadership team – I am very satisfied that the conduct of the inspection team was entirely appropriate throughout the visit,” Wilshaw said.

“They handled the discussion with a group of pupils sensitively, taking proper account of the age of the children involved. This included questions about how they felt the school prevented and tackled bullying and the use of derogatory language. I utterly reject the suggestion that the inspectors’ questions could in any way be construed as advocating a particular lifestyle or risked ‘sexualising young children’.”

The Ofsted inspectors cut short their visit to the school last Thursday after being confronted by parents threatening to remove their children from the school if the inspectors remained. Despite the shortened inspection, Wilshaw said a full report was being written based on the evidence gathered and will be published shortly.

A DfE spokesperson said: “Our role as regulator is to take action if there are any concerns that a school is not meeting the independent schools standards. It would be inappropriate to comment on individual inspections until Ofsted has published its findings.”