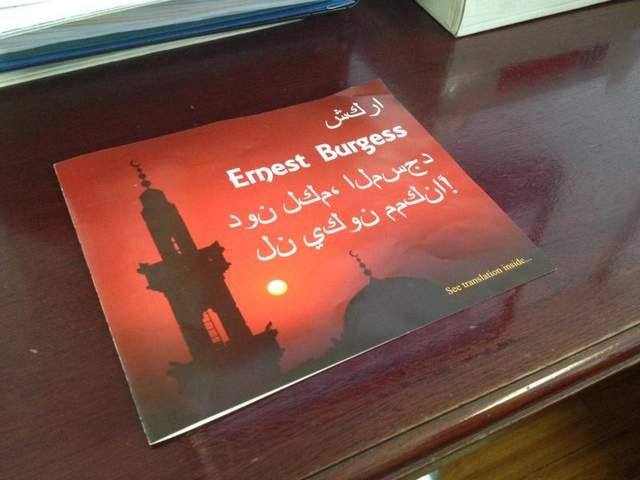 “Thank you Ernest Burgess,” the flyer states to serve as a translation for what appears to be Arabic writing related to the government approving the ICM. “Without you, the Mosque would not be possible!” “That’s true,” Evans said during an interview in his office at his car dealership on Northwest Broad Street in Murfreesboro. “Without Mayor Burgess, the mosque would not be possible.”

The front page of the advertisement that displays the name “Ernest Burgess,” shows Arabic writing, images of mosque structures with a sun in the background and then adds “See translation inside …” But the American Center of Outreach, a local Muslim advocacy group, said the Arabic letters first appeared to be gibberish but actually are the intended words backward and without proper punctuation or spacing for the language.

Evans is running against Burgess in the May 6 Republican primary for Rutherford County offices. Early voting is going on through May 1 for the GOP primary. The general election is Aug. 7.

Mayor Burgess offered the following statement about the advertisement: “This is ancient history and nonsense,” Burgess said. “My campaign is focusing on the positive things that have happened in Rutherford County and will continue to happen.”

The Evans’ advertisement goes on to blame Burgess for the issues related to the ICM. This includes the county failing to provide adequate notice before the mosque plans were approved by the county’s Regional Planning Commission; the county’s Board of Zoning Appeals allowing a cemetery without conditions pertaining to traffic and flooding; and the county spending more than $340,000 to defend itself in lawsuits. “County Mayor Ernest Burgess mismanaged the entire process and let us down!” the advertisement states.

Evans, during an interview Thursday at his car dealership, said he supports religious freedom for the ICM. “I’m not a bigot,” Evans said. “The last thing I am is a bigot.” The problem is that the county officials failed to provide enough public notice about a large ICM building plan for a center that would be nearly 53,000 square feet, Evans said.

“They did the minimum (public notice) the law requires,” Evans said. “I think the way it was handled turned into a fiasco because of the mismanagement,” said Evans, adding that the county should have sent notices about the mosque plans to neighbors and put up signs and allow the residents to speak about a proposal for a large building. “They should have because this is a special situation. In my opinion, they slid through with the minimum (public notice). It was going to be controversial either way. If they had given adequate notice, why not let the people speak prior to those actions being taken?”

The ICM moved into the first 12,000 square feet August 2012. The building includes a multipurpose room for worship, meals and other gatherings.

The congregation has long-term plans to construct a formal mosque for worship, classrooms for weekend religious study, a gym and an indoor pool. The exterior grounds include a concrete basketball court, a playground, two concrete slabs for future picnic pavilions by the playground and a cemetery that faces a lawsuit challenge. The congregation also has long-term plans to grade a sports field.

This is the second time Evans has campaigned to be mayor. He ran unsuccessfully as a Republican in a close race against incumbent Democratic County Executive (now called mayor) Nancy Allen in 2002 when her party held all eight elected constitutional offices that oversee county government.

The flyer also refers to testimony Mayor Burgess gave during an eight-day hearing fall 2010 when plaintiffs were seeking to halt construction of the ICM center: “While under oath, The Mayor denied knowing the ‘Applicant,’ ‘President’ and ‘Owner’ of the Mosque property who happened to be an employee of his family business for 25 years.”

The flyer’s comment about an employee is referring to Essam Fathy, a founding member and board chairman of the ICM and a physical therapist who has done contract work for National Healthcare Corporation, the mayor confirmed in his testimony. Burgess is a retired senior vice president of operations with NHC after a 21-year career with the company and remains a board member with the Murfreesboro firm.

The flyer also notes that Chancellor Robert Corlew III acknowledged he had concerns that Burgess did not state in initial testimony prior knowledge of the ICM founder. Corlew by June 2012 ruled the county failed to provide adequate public notice and suggested the local government place the ICM issue back on an agenda, provide proper public notice and vote on the issue without discriminating against the congregation’s religious land-use rights.

Higher state courts overruled Corlew. The plaintiffs led by Kevin Fisher, Henry Golczynksi and Lisa Moore are asking the U.S. Supreme Court to hear an appeal. Golczynski‘s wife, Bonnie, is the lead plaintiff in the cemetery lawsuit. The couple lost a son, Marc, a Marine sergeant who was killed from a gunshot wound while serving in the war in Iraq March 2007.

Saleh Sbenaty, an ICM board member, said he is offended at the message contained within the flyer. “It is really sad for Mr. Evans to use our community suffering to try to score political points,” Sbenaty said. “Our community has been suffering for a long time, and it’s about time to have an end to this nonsense. He is criticizing people for doing their job upholding the U.S. Constitution and upholding the law.”