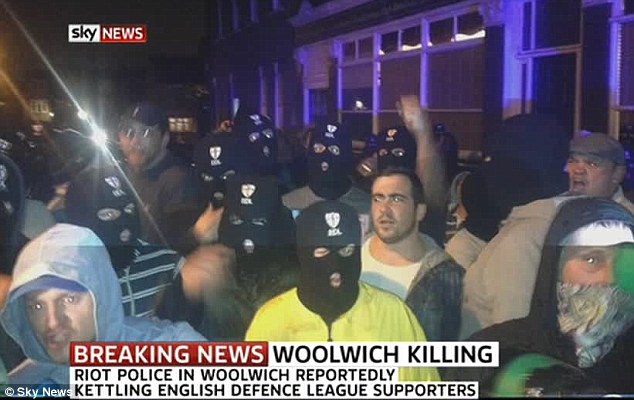 More than 100 supporters of the English Defence League tonight gathered at a train station near the scene of where a man was allegedly hacked to death by extremists and threw bottles at police.

Officers formed a cordon and the men left the immediate area after the brief incident. Some of the EDL supporters gathered at The Queen’s Arms pub locally, where they sang nationalistic songs.

The men had first gathered at Woolwich Arsenal station in Woolwich, south-east London. Riot police with shields stood guard outside for a short time, before moving back into their vans. The EDL group waved a flag of St George and chanted “no surrender to the Muslim scum”. Around 20 of the men wore black balaclavas with an EDL logo on the front.

Leader Tommy Robinson addressed the crowd, saying: “We have got weak leadership. They have allowed this to happen. People are scared to say the word Muslim. They are scared to offend them. You know what? We are offended. People in this country are angry. They have had enough.”

The crowd, chanting “Rule Britannia” and “EDL”, as well as “England”, marched to the cordon where the killing took place. Others chanted “No surrender to Al Qaeda”. A statement on the EDL’s website said: “The terrible events in Woolwich today were a reminder of something very few are willing to accept. We are at war.”

A Metropolitan Police spokesman said he was not aware of any arrests following the protest tonight.

Update:   EDL leader Stephen Lennon was at the Woolwich protest. He stated:

“They’re chopping our soldiers’ heads off. This is Islam. That’s what we’ve seen today. They’ve cut off one of our army’s heads off on the streets of London. Our next generation are being taught through schools that Islam is a religionof peace. It’s not. It never has been. What you saw today is Islam. Everyone’s had enough. There has to be a reaction, for the government to listen, for the police to listen, to understand how angry this British public are.” 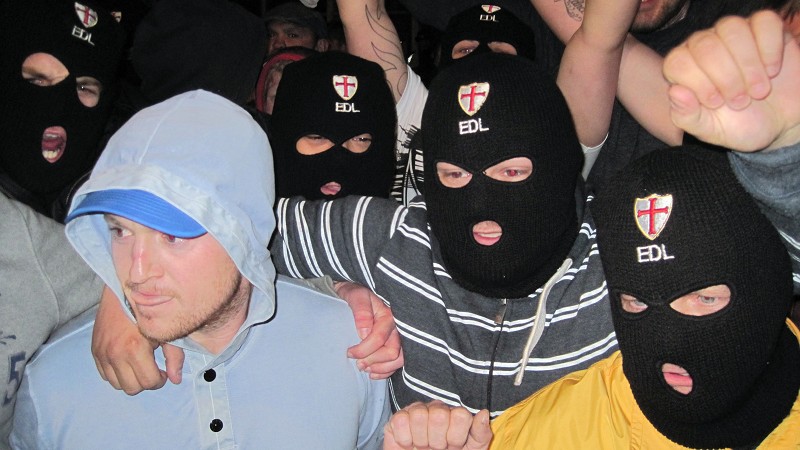