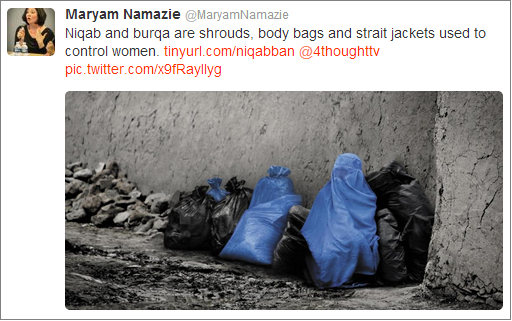 For reasons best known to themselves, the producers of Channel 4’s 4thought.tv slot decided to give Maryam Namazie a platform to demand a ban on the niqab. You can watch it here.

Namazie was allowed to present herself as an ordinary ex-Muslim who turned against the niqab as a result of her experiences in Iran (where, in fact, there is no legal enforcement of the face-veil). There was no indication that Namazie is a leading figure in the Worker-Communist Party of Iran, a crazed far-left sect with a long history of Islamophobia.

Namazie herself is on record as stating: “The veil is not just another piece of clothing – just as FGM is not just another custom. I suppose if it were to be compared with anyone’s clothing it would be comparable to the Star of David pinned on Jews by the Nazis to segregate, control, repress and to commit genocide.”

And in that instance, she wasn’t even writing about the niqab but in defence of the French ban on the hijab.

Immediately following the July 2005 London bombings – in the context of a violent Islamophobic backlash during which one Muslim, Kamal Raza Butt, had just been beaten to death – Namazie’s response was to write:

“we are constantly told this terrorist attack has nothing to do with Islam by ‘mainstream’ Islamic groups such as the Muslim Council of Britain…. Britain’s ‘top Muslim scholars’, for example, are to issue a fatwa effectively ex-communicating the ‘bombers’…. And they say they are not part of the same movement and that this has nothing to do with Islam. In fact, terrorism is justified and encouraged in Islam…. The Koran is full of verses supporting terrorism.”

This is the individual to whom Channel 4 grants a slice of prime-time television to expound her views on the niqab.

Namazie is of course very pleased that they did. You can see above how she tweeted the news to her followers. Yes, this is a self-styled communist who thinks it’s perfectly acceptable to compare a veiled Muslim woman to a sack of rubbish.

This is a familiar right-wing trope. Earlier this year an Enfield councillor was expelled from the Tory Party for posting a photo on Facebook that drew such a comparison. Tina Petersen, a former MP for the far-right Danish People’s Party, was in trouble last year when she did the same. That’s the sort of company Namazie finds herself in when she posts this image.

Just recently Anne Marie Waters was pressured into resigning from her post as co-spokesperson for the anti-sharia campaign One Law for All, and Namazie published what was effectively a justification of this decision on the OLFA website, condemning unnamed persons for “finding solace in and partnership with the far-Right”. It wasn’t difficult to work out who she was talking about.

But the only real ideological difference between Waters and Namazie is that the latter rejects attempts to tie her Islamophobic propaganda to the issue of immigration. Apart from that, their attacks on Islam are barely distinguishable, and both of them reinforce the anti-Muslim narrative of the racist right.