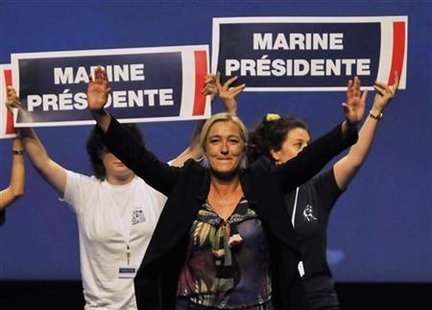 French far-right leader Marine Le Pen switched her presidential campaign back to immigration on Sunday, accusing Nicolas Sarkozy of bowing to Muslim pressure over how animals are killed for meat, to try to head off his attempts to poach her supporters.

Le Pen had sought to attract voters by shifting from a traditional emphasis on immigration and French identity to leaving the euro and imposing protectionist barriers, to exploit discontent over the debt crisis in Europe and globalization.

But at a congress of her National Front party in Lille, Le Pen returned to familiar anti-immigration territory, saying she had proof that all meat in Paris was halal. “This situation is deception and the government has been fully aware of it for months,” Le Pen said. “All the abattoirs of the Paris region have succumbed to the rules of a minority. We have reason to be disgusted.”

Le Pen’s aides said she would file a legal complaint on the matter. During her closing speech she said the government was bowing down to “Islamic radicals.”