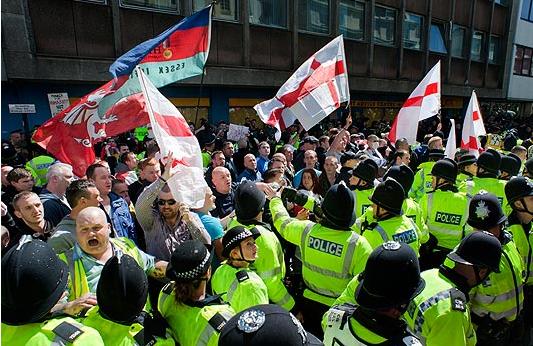 Antifascists in Brighton have scored a fantastic success against “March for England” – an outfit with close ties with the English Defence League.

MfE supporters and flags are regularly in evidence at demos organised by the racist and fascist thugs of the EDL. Their Brighton event was also being backed by the EDL-linked racist football hooligan organisation Casuals United, which told supporters not to wear “colours” – EDL or Casuals clothing or insignia.

But it wasn’t a good day for the EDL in disguise. Around 1,000 antifascists, overwhelmingly local residents, turned out on the streets of the city today, vastly outnumbering up to 120 of the EDL’s mates, who arrived by train. The antifascist demonstrators were joined by local MP Caroline Lucas as well as some local councillors.

Crowds of antifascists filled Brighton’s streets to block the march by the EDL and their racist mates. Despite a heavy police escort, the fascists were repeatedly forced to divert from their route into sidestreets. Antifascists even set up a barricade to block one street. The racist march was surrounded throughout, with its chants drowned out by hundreds of antifascist demonstrators.

The racists were humiliated as Brighton people made clear – in great numbers – their pride in their diverse city. There was a celebratory air among the antifascist demonstrators as it became clear the streets and the day belonged to them. 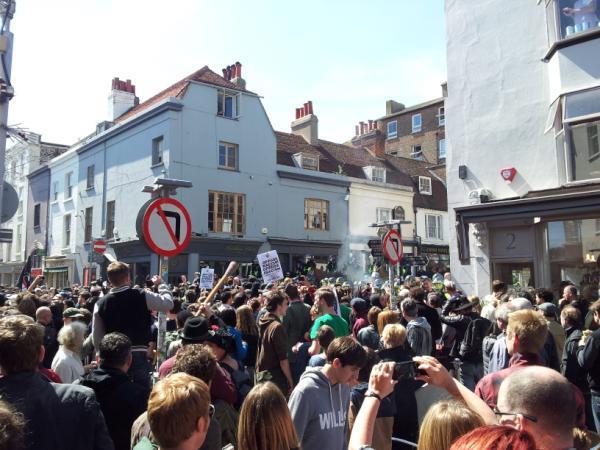