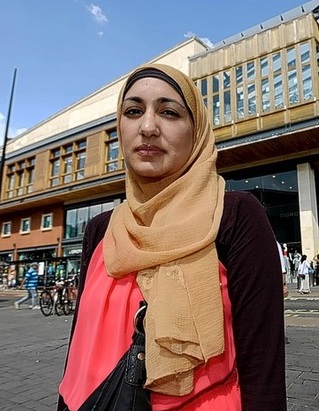 A Muslim woman who was spat at during a racist rant in Cabot Circus has spoken of her shock at the people who turned a blind eye.

Jack Hughes, 26, of Upton Road, Bristol, was fined £336 for assault at a court hearing this week for his attack on Hasina Khan.

As reported by the Bristol Post when it happened in July, Hughes spat on her hand and hijab head dress while launching into an Islamophobic rant.

Hasina issued an passionate plea for help to track down the perpetrator through this newspaper.

Following his conviction, which includes 120 hours of community service, she said: “It is my body and if I chose to cover it that’s my decision. There are lots of beautiful women who chose to cover their bodies and they should not live in fear of being attacked.

“What is frightening is that a small woman was attacked by a male in broad daylight in a public place, there were many onlookers who turned a blind eye and who did not even approach the woman to ask if she was okay. That is a very bad snapshot of society.

“I hope other women come forward and report the attacks they have experienced.”

The incident happened on July 21 while Hasina, 36, from Horfield, was walking past Cabot Circus. After the Post’s appeal the man was tracked down and arrested a week later, and pleaded guilty to assault at court on Wednesday.

Alex Raikes MBE, interim director of Bristol charity Stand Against Racism & Inequality (SARI) said: “This is an Islamophobic incident where a complete stranger decided they could assault someone just because they of their faith and the way they dress. This attack was not just on Hasina – it was on her family and her entire community. It was on all people who are Muslim.”

She added that the charity has seen a rise in Islamophobic hate crimes recently, which now represent 40 per cent of its case load.

She said: “SARI asks that all Bristol residents who read this article do all they can to stop hate crime and racist abuse. This means not walking by when they see someone being bullied, harassed or attacked but speaking out and saying this is wrong.”