Thames Valley Police has arrested a 30-year-old man in connection with an arson attack on a mosque in Milton Keynes.

Officers were called to the mosque in Manor Road, Bletchley, shortly before 1am this morning (8/3) after reports of a man seen acting suspiciously shortly before a fire was started at the rear of the building. Officers carried out enquiries at the scene which led to them arresting a man on suspicion of arson with intent to endanger life shortly afterwards. No one was hurt in the incident. The man, who is from the Milton Keynes area, remains in police custody at this time.

Insp Lee Brace said: “There is a scene watch in place at the mosque at this time while enquiries are on-going and officers will be carrying out increased patrols in the area.  Anyone with concerns about this incident should speak to them about these. We would also like to hear from anyone who may have information about this incident, or who may have witnessed the event and be able to help with the investigation.”

Anyone with information about this incident should contact Thames Valley Police via the 24-hour Enquiry Line on 101. If you don’t want to speak directly to the police you can contact the independent charity Crimestoppers anonymously on 0800 555 111 or online at www.crimestoppers-uk.org. No personal details are taken, information is not traced or recorded and you will not go to court. 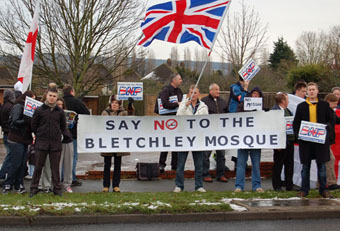 The disused pub’s conversion into a mosque was the subject of an extended far-right campaign during 2010-11, in the course of which the building was subjected to repeated vandalism and there were rumours of a planned arson attack. Last year stones were thrown at the mosque.