The question immediately arises: how on earth could a blind eye have been turned to all this by the social services departments under whose care these girls were living, as well as by the police to whom they went for help?

The answer is as clear as it is devastating. For these men were all Muslims: eight of them of Pakistani origin and one from Afghanistan…. And what paralysed these authorities was that, in politically correct Britain, no criticism is allowed to be made of religious or ethnic identities. The authorities could not allow themselves even to think there was a problem with any minority community. So they pretended the problem was not what it actually was. And so the child rape industry proceeded with repeated failures to prosecute.

Exactly the same paralysis of the mind is on display in the reaction today to these atrocious and horrifying disclosures. The word Muslim is simply absent from much of the coverage…. The police maintain doggedly that this has nothing to do with race. What a red herring. Of course it doesn’t! This is about religion and culture – an unwesternised Islamic culture which holds that non-Muslims are trash and women are worthless.

… the fact that Muslims are disproportionately represented among the perpetrators of this particular crime means inescapably that a cultural Muslim issue is involved. If this is not acknowledged, this terrible pattern of abuse will simply continue. And those who shriek “racist” or “Islamophobe” at all who point this out in order to stifle proper debate thus make themselves also complicit in these outrages.

For a rather more informed analysis see Ella Cockbain and Helen Brayley, “The truth about ‘Asian sex gangs'”, Guardian, 8 May 2012

And Paul Vallely, “Child sex grooming: the Asian question”,Independent, 10 May 2012 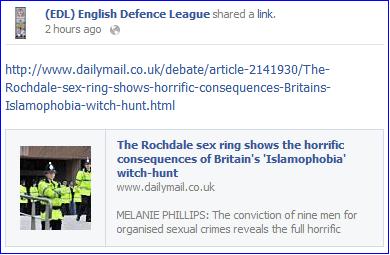