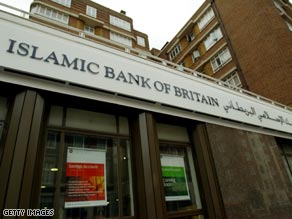 “Worried that Britain is going bankrupt? Cheer up – we’re about to be bought up by the Islamic world. A report by International Financial Services London reveals that Britain’s Islamic banking sector is now bigger than that of Pakistan. The study says that the UK has by far the largest number of banks for Muslims of any western country….

“What has to be understood is that sharia finance is simply a modern jihadi strategy to help Islamise Britain’s institutions and society. It was devised in the mid-20th century by the ideologues who promoted the radical Islamism that threatens us today. They advocated sharia finance as element of a separate, self-sustained Islamic order with its own Islamic ideology, Islamic politics and Islamic economics that taken together would guarantee an Islamic way of life and ultimately the Islamic state as the first step toward establishing Muslim rule worldwide.

“As Britain’s government and banks congratulate themselves on the stunning growth of sharia banking in the UK, do any of them have the slightest understanding of what they are doing?”