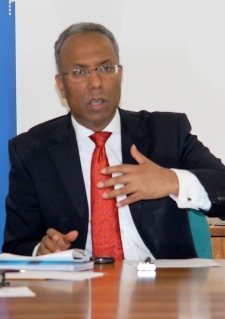 The Mayor of Tower Hamlets has given the Metropolitan Police Commissioner until Monday to seek a Home Office ban on the English Defence League marching through London’s East End on September 3. Lutfur Rahman has thrown the gauntlet down and told the commissioner he will go to court unless an application is made.

“I will instruct lawyers on Monday to go to the High Court and seek injunctive relief if the Met Police fail to act,” he told a Town Hall news conference this-afternoon. “We will not let the EDL or any other bunch of extremists divide our community. The EDL just wants images of our young people fighting on the streets to show that multi-cultural Britain doesn’t work – but we stand united in the East End against hatred and Racism. The authorities must act to ban the EDL.”

He is challenging Home Secretary Theresa May to use her powers to stop the EDL coming to Whitechapel on September 3 on the grounds of public safety. He was backed at the news conference in his call for a ban by community and religious leaders who have come together under the United East End alliance.

“Fear and anxiety grows every day that passes without action from the police of Home Secretary,” the mayor added. “If no action is taken, we have no option but to protect our residents and take the police and Home Secretary to court.”

Tower Hamlets council’s legal department has written to the Acting Commissioner to demand they apply to the Home Secretary to ban the march under the Public Order Act, in the light of last week’s London riots. Legal proceedings will begin, they warn, if there is no response by Monday or if the response is not in favour of a ban.