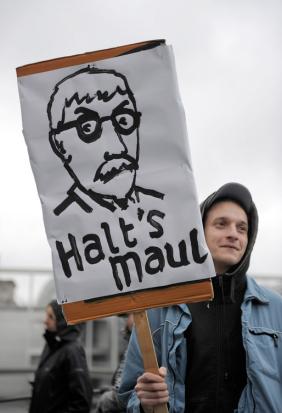 A German banker who has said “all Jews share a certain gene” and described Muslims as “dunces” will speak tonight at the London School of Economics amid a row over free speech.

Anti-fascist campaigners vowed to demonstrate outside the LSE during Thilo Sarrazin‘s appearance in a debate on multiculturalism. The former executive member of the Bundesbank caused outrage in Germany last year with his comments, in which he also attacked Basques. He was removed from the country’s central bank and raked down by the German Chancellor, Angela Merkel, who called him “stupid”.

Jewish groups in London warned yesterday that allowing Mr Sarrazin a platform in Britain would be “provocative and almost certain to stir further hatred and offence”. He also labelled Germany’s Middle Eastern population “dunces” and attacked Muslims for not integrating well is due to appear as a speaker in a debate as part of the German Symposium event organised by the German Society at LSE.

Sabby Dhalu, the joint secretary of Unite Against Fascism, called for Mr Sarrazin to be banned from the UK. “There is grotesque double standards in the implementation of bans on people entering Britain. There is no doubt that a known Muslim spouting similar views would be denied entry,” she said.

“LSE’s German society’s invitation to Thilo Sarrazin to address their ‘Future of Germany’ meeting is misguided and ill-judged. The title and invitation imply that Sarrazin is the future. I wonder how many Jewish and Muslim German people agree with him? Such vile, racist, anti-Semitic and Islamophobic views have no place in Britain, Germany or any other country.”

The LSE supported the society’s decision to invite Mr Sarrazin. A spokesman said: “LSE is committed to the principles of free speech and is, traditionally, a place where renowned speakers come to explain their thinking and answer questions. Students are free to hold and express their own views and this extends to organising events.”

A Home Office spokesman refused to comment on any individual cases. Theresa May, the Home Secretary, has the power to ban anyone from the country whose presence is not considered conducive to the public good but Mr Sarrazin’s entry to Britain is not thought to have been barred.

Update:  According to this report the event at which Sarrazin was due to speak has been cancelled by the LSE. It was moved to theWaldorf Hilton.