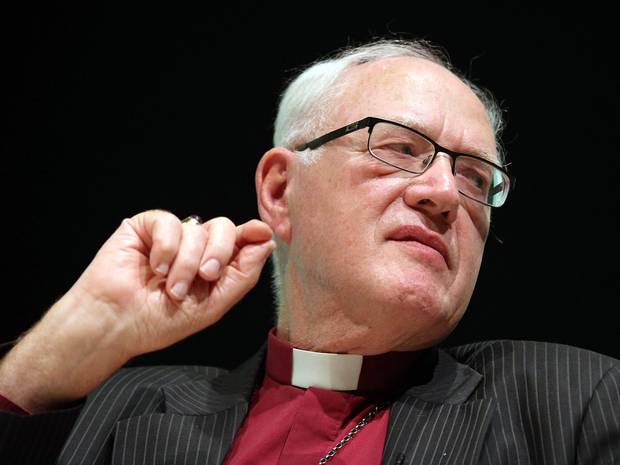 Lord Carey, the former Archbishop of Canterbury, has called on leading British Muslims to support the right to convert from Islam to another religion after a court in Sudan sentenced a woman to death for apostasy.

The peer said it was “accepted doctrine” that Muslim converts should face the death penalty. He also said there were examples of ex-Muslims in Britain who had been forced to “almost go underground”.

“Isn’t there something fundamentally wrong with Islam at its core that it cannot allow people to change their religion?” he told The Sunday Times. “It is accepted doctrine in Islam [that] you don’t convert and if you do the penalty may be death.” He added: “I want to hear Muslim leaders say ‘we allow Muslims to become Christians if they wish to’.”

Lord Carey spoke out after Meriam Ibrahim, 27, was sentenced to death by a sharia court in Sudan after refusing to recant her Christian faith. The sentence has been suspended as she is pregnant.

By Nicholas Hellen and Miles Amoore

BRITISH Muslims should abandon the doctrine that converting from Islam is punishable by death, according to Lord Carey, the former Archbishop of Canterbury.

He intervened amid international outrage at the death sentence imposed by an Islamic court in Sudan on Meriam Yehya Ibrahim, 27, a pregnant woman, for her refusal to recant her Christian faith.

Carey described the verdict as a “tipping point” and said in an interview with The Sunday Times: “Isn’t there something fundamentally wrong with Islam at its core that it cannot allow people to change their religion? Moderate Muslims … have to say enough is enough.

“It is accepted doctrine in Islam [that] you don’t convert and if you do the penalty may be death. When Muslims do convert they almost go underground and there are examples of this in Britain.”

He said Muslims in Britain “get a really good deal” here with the freedom to worship and to convert people to Islam.

Ibrahim, who is eight months pregnant, was convicted of apostasy, or the renunciation of faith, by a court in Khartoum last week after she told the judge: “I am a Christian and I never committed apostasy.” Sudan, where the majority of the population is Muslim, is governed by sharia (Islamic law).

Ibrahim is in prison with her 18-month-old son and is allowed a stay of execution for 1 years from when the baby is born for it to be weaned. Her husband uses a wheelchair and is entirely dependent on her, according to her lawyer. Ibrahim will also receive 100 lashes for adultery because her marriage to a Christian man is not recognised under sharia.

She was born to a Sudanese Muslim father and an Egyptian Orthodox mother. According to rights groups, she was brought up as a Christian after her father left when she was six years old.

Dr Al-Fatih Izz al-Din, the national assembly’s Speaker, said she was not brought up in a non-Muslim home, as she had claimed, but that both parents were Muslims.

Carey won some support from Inayat Bunglawala, chairman of Muslims4UK, who said: “It is so tragic that in the 21st century someone can still be sentenced to death for wanting to change their religion. We can only hope that the Sudanese authorities come to their senses and recognise the disservice they are doing to the way Islam is viewed by the rest of the world and rescind this death sentence.

“Ultimately, the issue of apostasy is part of a far wider question that much of the Muslim world is still struggling with – how to reconcile traditional Islamic doctrine with modern notions of human rights, including freedom of speech, freedom of association and sexual freedoms.”

Cardinal Vincent Nichols, the Archbishop of Westminster, added his voice to those calling for the death sentence to be lifted: “I, together with all Catholics and many who share our profound respect for life, plead for clemency to be shown to Meriam Yehya Ibrahim … I make this plea also for the sake of the innocent child who would be deprived of her mother if the sentence were carried out.

“The right to life and the right to religious freedom are fundamental to the dignity bestowed on every one of us by Almighty God. The denial of either, or both, undermines the basis on which a just society that promotes lasting peace has to be built.”

Michael Nazir-Ali, the former Bishop of Rochester and chairman of Oxtrad, which trains Christians for ministry in places where the church is in danger of persecution, said some signatories to the Universal Declaration of Human Rights had circumvented article 18, which guarantees freedom of religion, by adding a proviso that it would be upheld insofar as it was consistent with sharia.

He said he was “outraged” by the way Ibrahim had been “victimised”.

The UK does not provide direct funding to Sudan but offers aid through the United Nations and the World Bank.

The Department for International Development condemned the Sudanese court ruling, saying: “Sentencing a woman to death for following her religious beliefs is truly appalling.”