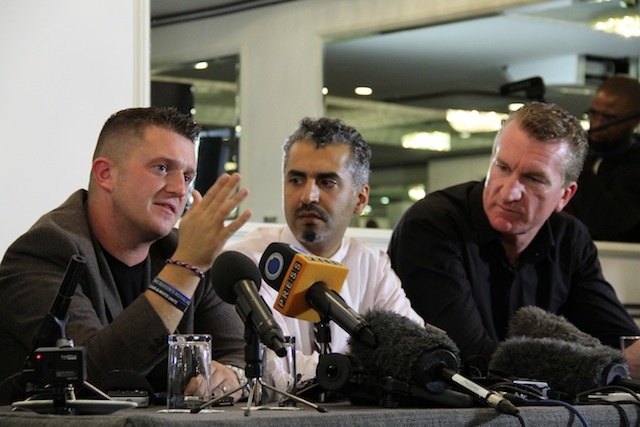 Fresh from assisting the former (but entirely unreformed) English Defence League leader Stephen Lennon to carry out a cynical rebranding exercise, and then joining his protégé in spreading inflammatory anti-Muslim rumours, Quilliam’s Maajid Nawaz has now taken up the battle against the niqab.

In an article for the Daily Mail‘s RightMinds blog, Nawaz declares: “It’s time we tackled head on the genuine security concerns and social consequences of face-veiling in modern Britain.” The Mail, of course, is notorious for its PC-inspired reluctance to address that issue.

It is not only reasonable, but our duty to insist individuals remove the veil when they enter identity-sensitive environments such as banks, airports, courts and schools. Legally speaking, there is no basis for any exception to be made, but the sad fact is exceptions are being made because we have become too spineless to do anything about it. Let me make this clear: it is our duty to adopt a policy barring the wearing of niqabs in these public buildings.

Nawaz asserts that there is a serious threat posed by “men – very dangerous men, in fact – who are evading our security services disguised as women in burkas”. As evidence for this, he offers just three examples from the UK over a period of eight years, not one of which would have been affected by the ban he proposes. (The story Nawaz recounts of how in 2006 “murder suspect Mustaf Jama slipped out of the UK via Heathrow . . . dressed in a burka” had no basis in fact even at the time, and it subsequently turned out that Jama fled the country using a friend’s passport.)

Nawaz endorses the view, much favoured by a section of the political right, that wearing the niqab is less a personal religious commitment than an excuse to provoke social conflict. According to him:  “… many young Muslim women – and their far-Left allies – appear to be defending the niqab as a form of ‘rage against the machine’. The niqab, for some, has become an anti-Establishment symbol around which one can rally and relish in the opportunities for confrontation that it provides.”

Nawaz hopes he will soon be in a position to impose a niqab ban of his own. As the Liberal Democrats’ prospective parliamentary candidate for Hampstead & Kilburn, he promises that he will “insist, if I am elected, that all people visiting my surgery or office verify their identity, which means revealing one’s face”. The reason for this, Nawaz claims, is that he fears an individual wearing a veil might be a terrorist out to kill him.

So if Nawaz gets to be MP for Hampstead & Kilburn at the next general election, any veil-wearing Muslim constituent who asks for his help will presumably be denied it, unless she obeys his instruction to uncover her face. And, on top of that, she will have as her parliamentary representative a man who has done his best to associate her clothing in the public mind with terrorism and murder.

There must be quite a few Liberal Democrats in Hampstead & Kilburn who are wondering how on earth they came to choose as their candidate a man with such deeply illiberal views. As for Nawaz himself, surely he’d be better off leaving the Lib Dems and joining the UK Independence Party. The only obstacle I can see would be that Nigel Farage might regard his views as a bit too extreme.