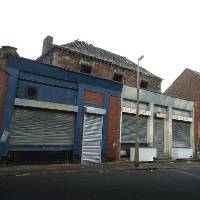 A plan to build a three-storey mosque on the site of an old clothing factory has won the backing of Leeds councillors – even though planning officers recommended it should be turned down.

The councillors decided the development would remove an eyesore [see picture, left] and benefit the community.

The new mosque will include halls, committee rooms, offices, storage rooms and a small car park. It will replace a small mosque in nearby Stratford Street which the panel heard the community had now outgrown.

A report to the panel said the original plan showed a building with a 17m dome and a minaret stretching to 23m in height. The scheme had been revised with the proposed dome now much smaller and six metres taken off the height of the minaret.

Despite the changes, council officials argued the building was still unacceptable. The report said it would be overly dominant, visually intrusive and clearly visible from Dewsbury Road. “The slope of the land will further emphasise the scale of the building,” the report added.

I mean, we can’t have a mosque being visible from the road, can we? You do wonder whether the same planning objections would have been raised if it had been a church.