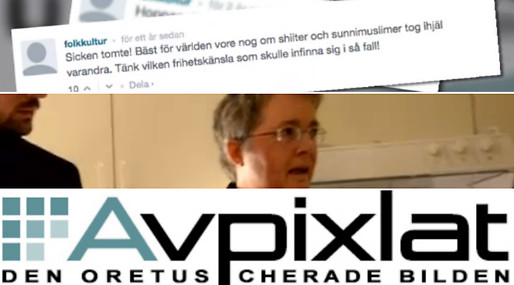 A leading Sweden Democrat has been forced to resign following revelations that she had posted xenophobic and insulting messages on various far-right websites.

“For us it’s primarily a question that representatives must never represent extremism regardless of platform,” Sweden Democrat spokesperson Martin Kinnunen said on Tuesday.

Marie Stensby represented the Sweden Democrats in Jämtland in northern Sweden and was voted in as an alternate member of executive board at the recent party conference; until Tuesday’s revelation in the Expressen daily she had furthermore intended to stand for election to Sweden’s Riksdag in 2014.

The local politician previously leapt to national media attention in November 2012 when she called for the establishment of a “reservation for Sweden’s indigenous peoples” in her home county of Jämtland. “In my darkest moments I wonder if you (Prime Minister Fredrik Reinfeldt)… would consider adopting an old American model. For us Swedes who want to carry on being just that, Swedes,” she explained at the time.

Stensby is among some eleven representatives for the Sweden Democrats named by Expressen on Tuesday to be the people behind aliases used to express insulting and xenophobic comments on various websites frequented by Sweden’s far-right. The aliases have been exposed by a group named Researchgruppen which is credited by the newspaper with having established their identities via the forum platform Disqus.

Stensby resigned from all her positions of responsibility in the party on Tuesday following revelations that she posted “I hope they starve to death” in a comment on an article about teenage asylum-seekers who had begun a hunger strike.

Many of the comments attributed to other Sweden Democrat representatives contained derogatory and racist sentiments about Muslims and Africans. Many of those responsible openly admitted their comments and their aliases claiming that the websites were the only places they could air their views.

The affected websites posted defiant messages in response to what they call ‘opinion registration’ with Sweden Democrat-funded website Avpixlat for example promising revenge and warning that Swedish journalists will be given a ‘taste of their own medicine’.

The Local has sought comment from Avpixlat and Fria Tider on Tuesday but has not been successful.

Expressen reports that Stensby’s racist comments, posted on Avpixlat under the name “folkkultur”, were directed in particular against Muslims, to whom she applied a range of abusive terms ranging from “the invaders” to “rabble” and “locusts”. She commented that the world would be a better and freer place if Sunnis and Shias just killed each other. Employing rhetoric which echoed that found in Anders Breivik’s manifesto, she wrote that a third world war is approaching and asked whether the “original Europeans” will realise that “we are forced to take up arms”.