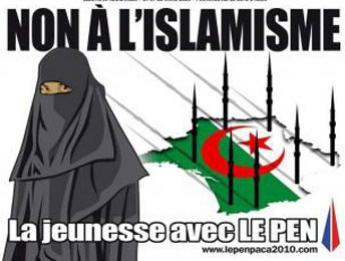 French far-right party the Front National (FN) has revealed its latest election poster – a map of France decked in Algerian national colours, covered with minarets and featuring a woman whose face is hidden behind a “niqab” face veil. “No to Islamism,” the poster screams in big black letters.

The image is central to the FN’s campaign in the PACA (Provence Alpes Cote d’Azur) region, where the party’s leader, octogenarian firebrand Jean-Marie Le Pen, heads the party list in forthcoming regional elections due to begin March 14. The posters, already widely diffused on the Internet, are due to be distributed across France.

French anti-racist group LICRA failed to get an injunction against the distribution of the posters at a Marseille Court on Monday on the technicality “that the group itself was not based in Marseille”.

French campaign group MRAP has started proceedings at a Nanterre court (Paris) to ban the posters. The court is due to make a ruling on Friday, two days before voting in the regional elections begin.

Another anti-racist group SOS Racisme has started criminal proceedings against Le Pen, who will have to attend the criminal court in Paris on May 6. The group said in a statement: “Under the pretext of denouncing religious extremism, Le Pen has clearly marked a wish to solicit fear and rejection of not only Muslims but also all people of Algerian origin living in France.”

At a FN campaign meeting last weekend attended by thousands of party supporters, many of whom were carrying the poster, Le Pen railed against what he perceives as the “Islamist presence in France” and said mosques were “growing like mushrooms” across the country. 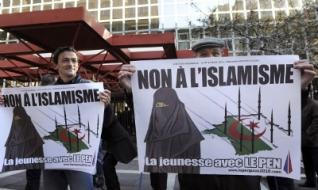