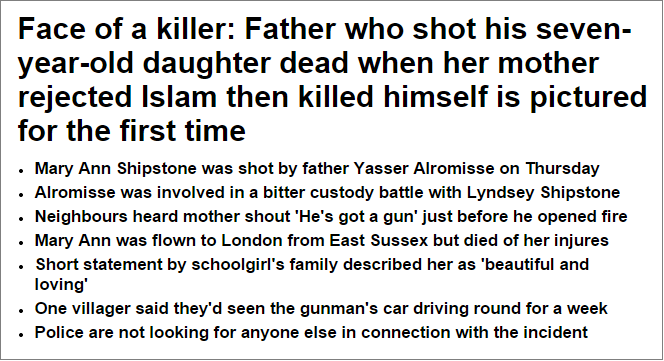 This is the headline to the Mail‘s report of the shocking murder of a young girl shot dead by her clearly mentally disturbed father in retribution for his failure to win custody and denial of access due to his earlier violent behaviour.

There is, needless to say, no evidence that religion played any part at all in the tragedy.

A number of below-the-line comments make this point. For example:

“This has nothing to do with Islam….it’s another estranged father taking out his bitterness on an innocent child.”

“There is a lot of mention of Islam in this article… The fact she rejected him is probably the only relevance here… Nothing to do with Islam… More to do with a father with serious psychiatric issues.”

“Similar has happened in the past, but the religion of the family or the murderer isn’t emphasized as to the extent it is in this tragic case. Why? it just causes hatred.”

However, it is notable that these comments have received far more red than green arrows from Mail readers.

Also, there isn’t a single comment blaming the father’s religion for the murder – which you might think is odd, given that the Mail‘s Islamophobic headlines usually provoke a spate of frothing-at-the-mouth anti-Muslim comments. However, comments at Mail Online are pre-moderated, and it would appear that such comments have been excluded in this case.

You can only conclude that even the Mail felt embarrassed at exploiting the death of a child to whip up Islamophobia and preferred not to reveal the hatred incited by its irresponsible journalism.

Not that this sort of distorted, bigoted journalism is restricted to right-wing tabloids, of course. The “secular humanist” journal The Freethinker reports the case under the headline “Girl killed after UK mum rejected Islam”.