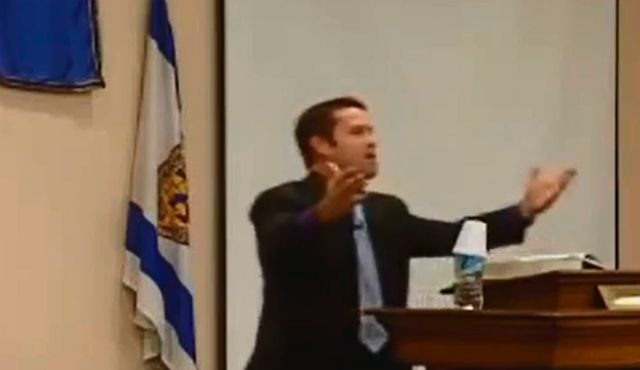 Until Friday, Jeremy Gimpel was just a name on a list. To be precise, he was number 14 on the list of Knesset candidates for Habayit Hayehudi, the new incarnation of the National Religious Party headed by Israel’s new political rock star, Naftali Bennett.

But the spotlight began glaring on Gimpel over the weekend after video from a speech the Atlanta-born Gimpel made to the Fellowship Church in Winter Springs, Florida, was posted on Facebook by journalist Yehuda Nuriel. The video caught the eye of veteran commentator Amnon Abramovich, who broadcast the video on the widely-viewed Channel 2 newscast on Friday night.

In his lecture, Gimpel said: “Imagine if the Golden Dome – I’m being recorded so I can’t say ‘blown up’ – but let’s say the Dome was blown up, right? And we laid the cornerstone of the Temple in Jerusalem. Can you imagine? None of you would be here – all of you would be like, “I’m going to Israel, right?” No one would be here, it would be incredible!”

After the newscast the video of Gimpel’s words went viral on Israeli Facebook, stunned commenters called Gimpel “dangerous,” “psychotic” and “a religious fanatic.” Nuriel followed up withanother video of a televised radio show in which Gimpel is quoted as saying the Dome of the Rock is so visually striking in Jerusalem in order to send the message that it “doesn’t really belong there.”