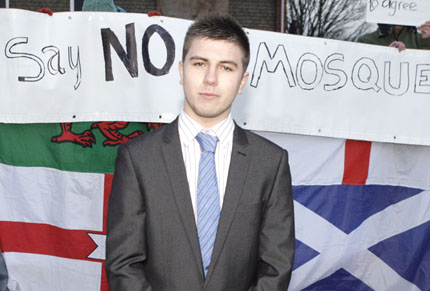 The former leader of the city’s BNP was ordered to carry out community service after he was found guilty of disturbing public order outside a former councillor’s house.

Kieren Trent was ordered to carry out 18 hours community service after harassing Mike Galloway, when he and fellow BNP members protested outside the former Councillor’s home in Wolverton.

Members of the BNP approached Mr Galloway, who was cabinet member for development at the time, because he had voted in favour of plans for a mosque to be sited at the former Plough pub in Bletchley.

Mr Trent, who told the court he was no longer a member of the BNP, was also ordered to pay Mr Galloway £500 in compensation and an additional £500 in legal fees.