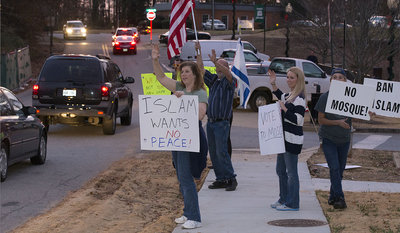 The City Council denied a request by Muslim residents to use space in a retail shopping center as a prayer center by a 4-1 vote Monday night, with Councilwoman Cris Eaton-Welsh voting in favor.

Doug Dillard, the attorney representing the applicant, Suffa Dawat Center at Kennesaw, said the council’s denial was a blatant attack on the applicant’s First Amendment rights to practice religion freely.

Dillard said the applicant, Mufti Islam, will fight back, and he has plans to bring a lawsuit against the city. “We think it’s discriminatory, and it violates equal terms,” Dillard said. “They had no reason to deny this.”

Nayyer Islam, who represents the mosque, said they will continue to fight for their right to worship in the retail center. “We’ll follow all the legal ways to continue to get the permit,” Islam said.

Eaton-Welsh said the applicant did everything he could. “I’m saddened,” Eaton-Welsh said. “The amount of anger that has come out of this was not something I ever thought Kennesaw was all about.”

The application asked for the use of a 2,200-square-foot suite in a shopping center off Jiles Road as a prayer hall for Muslims. The shopping center, called Kennesaw Commons, is at 2750 Jiles Road behind a Publix grocery store off Cobb Parkway.

The city attorney, Randall Bentley, and Dillard spoke for about 20 minutes before the council took a final vote on Monday. Dillard agreed to some stipulations in an attempt to compromise to address traffic-related concerns residents had about the mosque.

The application, submitted by Suffa Dawat Center at Kennesaw, states the facility will be used for five daily prayers lasting 10 to 15 minutes, and one 40 to 45 minute weekly prayer service on Fridays, which could see 60 to 80 people. Dillard agreed to cap the building capacity at 80 people and limit the number of parking spaces the mosque could use to 40.

Abdul Amer, who represents the mosque, said the stipulations were a tactic the city used to control the mosque. “They were trying to draft up some stipulations to push us around basically,” Amer said.

Sebastian refused to comment after the meeting. Williams said she voted against the application because she did not think a religious center should operate inside a retail shopping center. “I believe it’s a retail space. It’s as plain and simple as that,” Williams said.

Yet Williams and all four other council members voted unanimously in July to allow a Pentecostal church in a retail center when the council approved Redeemed Christian Fellowship Church to use a 4,000 square-foot unit in a center on the corner of Ben King Road and Cherokee Street.

Mayor Mark Mathews did not allow the public to comment on the mosque proposal at the Monday meeting. He said the vote on the church didn’t set a precedent because each application needs to be considered on its own.

“This is not anything that the city ever takes lightly for a land use permit, regardless of what it’s for. We are charged with honoring the law, the laws within the city and the ordinances within the city,” Mathews said before the vote.

A group of about 10 protestors gathered outside Kennesaw’s City Hall on Monday evening ahead of the vote waving American flags and signs saying “no mosque.” About 20 other residents gathered to attend the meeting.

Kamaral Hosein, of Kennesaw, who said he is a Muslim, expressed disappointment in the council and in his fellow Americans after the vote. “My reaction is, ‘Am I living in the United States of America? And am I really free? Or, am I just free if I’m like them?’” he asked, later specifying “them” meant Christians.

Chad Legere of Mableton stood outside City Hall while the council discussed the issue waving signs in protest. He said he doesn’t want the United States to become the next Europe. “There’s a way to stop Shariah law from getting into our country, and that’s what we’re doing,” Legere said.

Legere, who held a flag bearing the Star of David, said he thinks a mosque will bring radical Muslims to the community who will make the area unsafe. “The Christian religion is very peaceful. It teaches us to turn the other cheek, and that’s what we’re doing,” Legere said. “This flag (with the Star of David) incites them. It makes them mad.”

Arden Stone of Kennesaw, who said she is a Christian, supported the proposed prayer center. “I’m upset, and I think it was a shameful decision,” Stone said. “Legally, they have a right to be there. … I think the council was swayed either by their own prejudices or the prejudices of the people here protesting.”

Another protestor, Lynn Conner of Kennesaw, said she protested the prayer center because she is scared of what Muslims stand for. “I wanted to exercise my First Amendment rights while I still can, and I wanted to protect the Christian community that I live in against infiltration by the enemy who has gone on record with the goal to destroy everything we stand for,” Conner said.

People representing the Muslim faith and the prayer center said the protesters had a right to speak their minds, but David Scheidler of Marietta, who said he is a Taoist, said he wished Christians would remember the history of their faith before speaking negatively about Islam.

“For people who use Christianity as an excuse to protest — when Christianity was small, it was persecuted too. So, if they were really remembering their roots, they wouldn’t be here,” Scheidler said.

The brother of the applicant, Kashit Islam of Kennesaw, who said he is a Muslim, said the people against the mosque have a biased view of his religion. “They’re totally isolated here based on what the news shows them. They’re just basing their decision on what’s going on in Iraq and Syria. We’re not like that,” Islam said.

Hosein said he does not appreciate outsiders judging his religion by only looking at people who are extremists. “No one judges Christianity by the KKK, and that’s what they’re doing to us,” Hosein said.