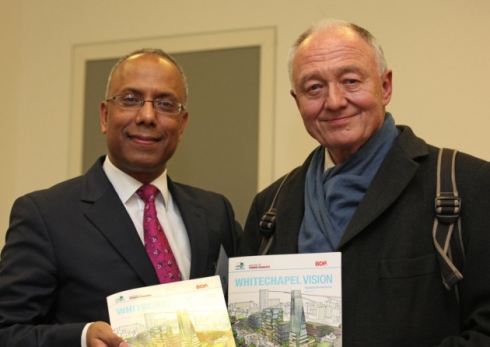 Ken Livingstone has launched a bitter attack on fellow Labour party members in defence of the controversial mayor of Tower Hamlets.

Lutfur Rahman is facing a series of government sanctions against his administration at the East End borough after a report by auditors. Communities Secretary Eric Pickles is appointing commissioners to take over key powers from Rahman after the report accused his council of a lack of transparency. He was ordered to halt all property deals, stop handing out council grants to community organisations and freeze the recruitment of senior executives.

Rahman was dumped as Labour’s mayoral candidate in Tower Hamlets in 2010 but went on to win as an independent. He was relected for a second term in May. Livingstone had a similar experience when he defied the Labour party to run for Mayor of London in 2000.

He described Rahman’s treatment as “like something out of East Germany”.

You’ve got a completely obscene underhand alliance between the Labour and Tory councillors to block everything that’s going on.

Council meetings are chaotic. There’s nothing Lutfur can do about that.

The local Labour Party members should be ashamed of what their councillors get up to – smears and innuendo, none of it ever stands up.

Eventually Lutfur Rahman will be re-admitted to the Labour Party once he’s eventually cleared of all these smears because he’s actually got one of the best records.

I’d take Eric Pickles to court. This is like something out of East Germany under the communists.