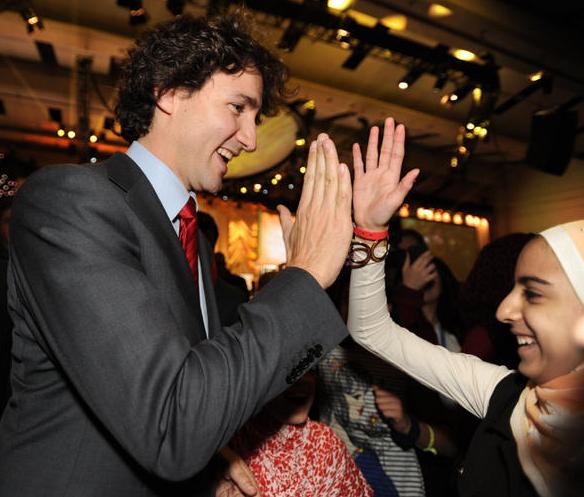 Liberal leadership contender Justin Trudeau told an Islamic conference Saturday that groups who attacked his decision to attend the gathering only work to divide Canadians.

Trudeau told a crowd of thousands at the Reviving the Islamic Spirit conference in Toronto that his critics attempted to tap into “fears and prejudices” that sap the acceptance of others.

“It is short-sighted to pit groups of Canadians against one another. It may make some feel good for a little while, or even work politically in the short term, but it is no way to build a country,” Trudeau said in a keynote address. “It is not who we are.”

Trudeau was criticized earlier this month by some Jewish groups and media outlets for agreeing to address the conference because of allegations of a link between one of its sponsors, IRFAN-Canada, and the militant group Hamas.

The attack on Trudeau’s participation at the Islamic Spirit conference in fact originated with the Point de Bascule website.

As the Canadian Council on American-Islamic Relations pointed out in a press release: “Point-de-Bascule describes itself as a ‘non-partisan’ website that ‘defends our liberties by educating people on the Islamist threat’. However, its Islamophobic bias regularly takes aim at Muslims using misinformation to foster fear and suspicion.”

Indicative of Point de Bascule’s politics was its condemnation of the presence of Tariq Ramadan as a speaker at the Toronto conference, on the grounds that Professor Ramadan is a “Muslim Brotherhood heavyweight” who wants to colonise the USA.