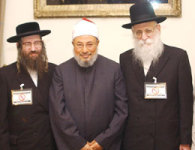 “Muslims have no problems at all with the Jews themselves. Our main conflict is with the Zionist movement. I hope that the Neturei Karta can introduce its stance to the Arab media so that people can know that there is a big segment of Jews opposing the Zionist entity.”

The noted “anti-semite” Yusuf al-Qaradawi comments on his meeting with Ahron Cohen and Yisroel Dovid Weiss.

It is a relief to hear that Cohen and Weiss emerged from their meeting with Qaradawi unscathed. After all, we have it on the reliable authority of Peter Tatchell that Qaradawi’s message is “destroy the Jews – all of them“.