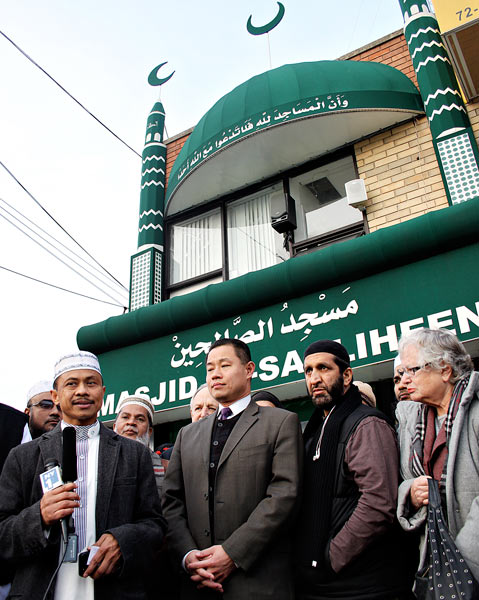 Jewish, Hindu and Muslim leaders from Queens gathered with lawmakers to denounce the possible hate crime committed at a Kew Gardens Hills Mosque earlier this month, and city Comptroller John Liu suggested some of the NYPD’s policies could make bias crimes more common.

“An attack on one of us is an attack on all of us,” said Imam Shamsi Ali, of the Jamaica Muslim Center, who gathered religious leaders from around Flushing in the wake of the Nov. 18 attack.

At about 5 a.m., 57-year-old Bashir Amad was opening the doors of the mosque for morning prayers when he was beaten, bitten and stabbed by a suspect police described as a 6-foot white man between the ages of 35 and 45 and weighing 180 pounds. According to the NYPD, the man shouted anti-Muslim statements before ambushing Bashir outside the house of worship, at 72-55 Kissena Blvd. As of press time Tuesday no arrests had been made.

Liu condemned the incident and called for justice, assuring everyone that the NYPD was following all possible leads to find the attacker. But he also contended that policies, like the NYPD’s practice of monitoring Muslims or barring Sikhs from wearing religious headwear while on the job, sends the message that it is acceptable to discriminate against these groups.

“Unfortunately, when Muslims are singled out for profiling, surveillance and other discriminatory actions, hate crimes such as this are more likely,” he said. Liu was referring to the NYPD’s controversial practice of infiltrating and monitoring mosques and student and business groups, even though the intelligence did not produce any indictments. The Police Department and Police Commissioner Ray Kelly have defended the practice as essential to protecting the city from terror attacks.

To show solidarity after the Kissena Boulevard attack, Ali called leaders from other houses of worship who gathered to decry the possible hate crime.

“Let’s not pretend we are all the same,” said Dr. Uma Mysorekar, of the Hindu Temple Society of North America. “We are different, but let’s respect those differences.”

Mysorekar stood with Amad and other members of the mosque, along with Rabbi Michael Weisser, of Flushing’s Free Synagogue, who also encouraged tolerance and understanding between the different faiths. “No act like this will drive us apart – eventually that will only draw us closer together,” he said.