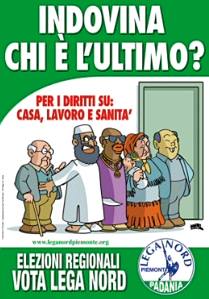 Italy’s Northern League, the populist, xenophobic, sometimes separatist movement that is a key component of Silvio Berlusconi’s governing coalition, has proposed new legislation which would in effect halt construction of new Islamic mosques.

The bill, which the League’s chief of deputies Roberto Cota is expected to send to parliament next week, would require regional approval for the building of mosques. It would also require that a local referendum be held, that there be no minaret or loudspeakers calling the faithful to prayer, and sermons must be in Italian, not Arabic.

Chances of this being approved as it stands are slim, since it clashes with a number of constitutional rights and there was no immediate support from either Berlusconi’s Forza Italia party or from the ex-fascist National Alliance.

But there has been cautious support from the small, ultra-Catholic UDC party, and the proposed anti-mosque legislation undoubtedly reflects widespread feeling among Italians that some defence against a rapidly rising Islamic presence is needed.