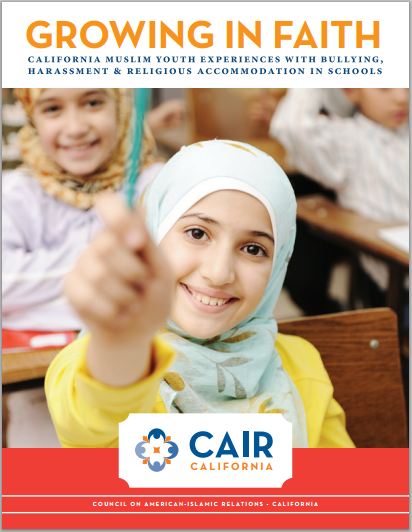 A new survey that tracks bullying directed at Muslim children and teens in California finds that half have at some point been subject to “mean comments and rumors” over their religion.

The survey was put together by the Council on American-Islamic Relations, a national American Muslim civil rights and advocacy group. It surveyed 471 Muslim students in California public schools between the ages of 11 and 18.

For the most part, students reported “a healthy school environment in which they were comfortable participating in discussions about their religious identity” and in which they felt safe and respected by teachers and safe at school. But there were problems, too.

Of the 50 percent who reported social bullying, along the lines of name-calling and other remarks, it was “stuff you would expect,” said report author Fatima Dadabhoy, a staff attorney and civil rights manager and staff attorney with CAIR in Anaheim.

“Being called a terrorist, or ‘What is that thing on your head?’…girls being called a towel-head, or jokes like ‘Don’t throw that bomb on me’ or ‘Don’t bomb us today,'” Dadabhoy said. “These were the most common ones we heard about.”

Ten percent of the kids surveyed reported physical bullying like slapping, kicking, or punching. Girls, in particular, were subject to bullying for wearing their hijab, the traditional Islamic head scarf: At least 17 percent of girls who wore hijab said they had experienced “offensive touching or pulling” of their hijab, four percent of whom reported experiencing this often.

The report quotes an 11-year-old girl from Daly City: “Many of my friends and I are a little afraid to wear a hijab because we are worried about being bullied.”

In addition, 21 percent of the students said they’d experienced some kind of cyber-bullying tied to their religion.

Interestingly, Dadabhoy said, bullying incidents reported seemed to spike around September 11, when classrooms address the terrorist attacks that took place in New York and Washington, D.C. that day in 2001.

“Just the repeat references to that made us realize that during this time is when it becomes a problem,” Dadabhoy said.

As classes are focusing on the national tragedy, Dadabhoy said, Muslim students may be feeling especially sensitive to begin with. And, she said, “if (other) students find they are the first Muslim they have encountered, they are going to question them.”

This may not be done necessarily out of malice, but simple curiosity. But a Muslim child or teen “might not have the tools to construct an appropriate response, or to be the voice for an entire community,” she said.

One noteworthy takeaway from the report is that students should be encouraged to report bullying incidents like these, even if classmates insist they are “jokes.” Only 32 percent of students who reported being bullied reported this to a teacher or principal; only 42 percent reported it to their parents. Many respondents said they simply internalized the bullying.

The report quotes one boy, a 15-year-old from Perris:

“Most of the time I am made fun of because of my religion. It is just a joke and the kids say that they are just ‘messing around with me.’ I just ignore it, but it does get annoying.”

The report recommends that students report bullying incidents, that parents who learn about or suspect their child is being bullied take action and report it, and that school administrators stay on top of these problems. From the report:

It is important for American Muslim students to know and effectively assert their rights on campus and, more importantly, for educators to know their responsibilities to ensure a safe and tolerant school environment for everyone.

The complete report is available here.