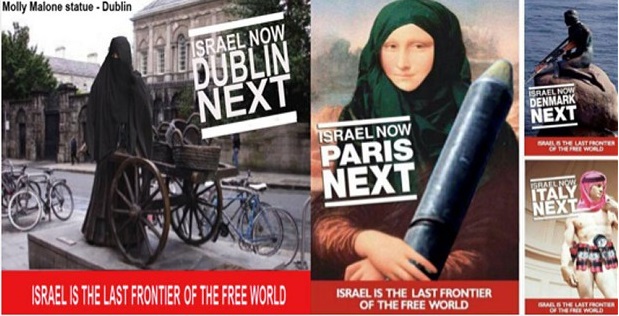 Dublin was not the only city to come into the Israeli propaganda sights. A montage of pictures also showed the Mona Lisa in Paris wearing a niqab and carrying a rocket launcher. Michaelangelo’s David was shown in Arab headgear and wired up as a suicide bomber with a warning to Italy, while Copenhagen’s Little Mermaid was shown holding a gun.

The Israel In Ireland Facebook and Twitter accounts have been blasted for sharing the series of controversial posts.

An embassy spokesman told the Irish Sun: “Yes they were sent from the official Facebook but they were taken down, I don’t know why. Often things get deleted for space reasons but it wasn’t taken down because of any complaints.”

But disgusted online viewers called on the Government to take decisive action.

One said: “Feckin’ Facebook has taken more action against Israel in Ireland than our own Govt! Useless, spineless cowards. Further disgusting imagery from the Israeli Embassy in Ireland @IsraelinIreland.” Another fumed: “A disgusting piece of propaganda incitement attempt by @IsraelinIreland – embassy in Dublin. Simply disgusting. #GazaUnderAttack.”

The Israeli Embassy in Ireland has been slammed for previous outrageous social network posts. In December 2012, it was forced to remove a Facebook update which suggested that if Jesus lived in the modern world he would “probably end up being lynched in Bethlehem by hostile Palestinians”.

More than 1,050 Palestinians, 43 Israeli soldiers, two civilians and a Thai migrant worker have died as rockets and shells have flown across the Israeli Gaza border since July 8.

Sinn Fein foreign affairs spokesman Sean Crowe was shocked by the latest images. He said: “On one hand it’s childish and lacks maturity, but when you consider 1,050 people have been killed, it’s wrong to be making light of the situation.

“This is such a sensitive time, you would think an embassy would treat it as such and would send out messages of reconciliation, not fan the flames. I can’t understand why anyone would take time to post stuff like this.” 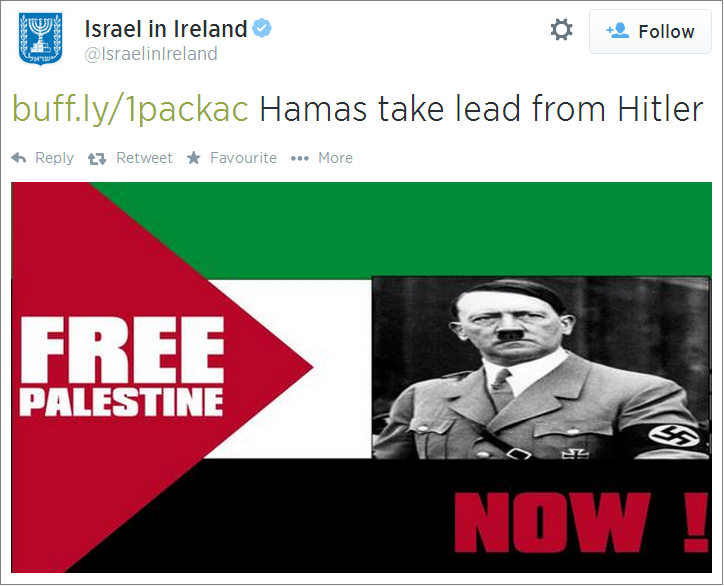