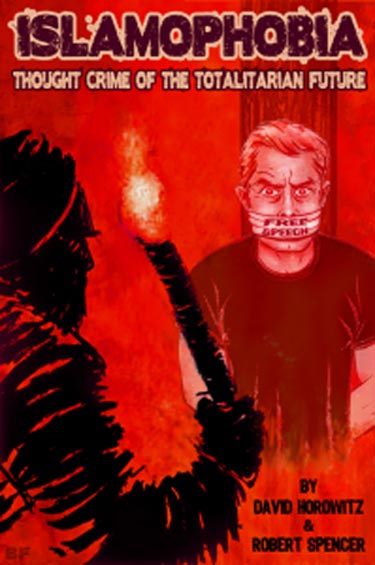 FrontPage Magazine reports that David Horowitz and Robert Spencer have a new book out:

In their new pamphlet, Islamophobia: Thought Crime of the Totalitarian Future, Horowitz and Spencer have created what amounts to a biography of this malign concept.

Their work shows how the term “Islamophobia” originated with the Muslim Brotherhood, is connected to violent protests over cartoons about Mohammed, the growing number of blasphemy laws in Europe, resolutions against this “form of racism” in the UN, and prosecutions of notable opponents of Islamic terror such as Oriana Fallaci and Geert Wilders.

They show, too, how what began as a political strategy by the Muslim Brotherhood has now spread to American higher education and has, like political correctness and other such mad experiments cultured in the campus laboratory, the potential to break out into the larger political culture.

We can only hope.