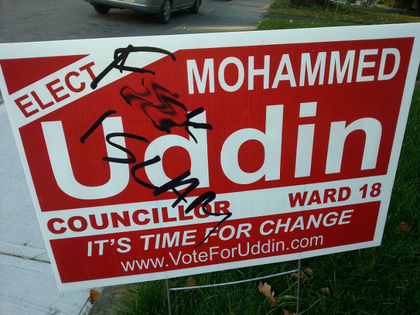 On Friday, a Purolator spokesperson issued a prepared statement that said the company is “deeply troubled about this report” and is “taking this matter seriously.” The spokesperson said Purolator President and CEO Patrick Nangle contacted Abukar on Friday morning “to apologize and express concern.”

This was not the first time Abukar has faced xenophobia on the campaign trail. Earlier this month, the Star reported that a campaign sign featuring Abukar wearing a hijab was defaced with the words “B—-” and “Go Back Home.”

“You can’t let a few election trolls ruin your city and ruin your home,” Abukar says. “There’s no room for hate of any kind in Canada”

TDSB Ward 10 trustee candidate Ausma Malik appears to be the target of an anonymous co-ordinated attack. In addition to being heckled at a candidates’ debate, her campaign office says that thousands of flyers were distributed throughout the ward this week which, among other things, accuse Malik of being a supporter of the Toronto 18 terrorist cell and a proponent of Sharia law. One flyer even has a photo of Malik superimposed over a yellow and green Hezbollah flag.

“The accusations are incredibly mean-spirited and they’re lies,” Malik says. “I’m doing this because I believe in public education, I believe in our community, and I believe that an inclusive, equitable and progressive public education system is possible – and especially in light of this, absolutely necessary.”

In Ward 18, council candidate Mohammad Uddin claims he has been the target of a steady stream of Islamophobic insults. On Thursday, he tweeted a photo of one of his campaign signs defaced with the words “F— Islam.” Uddin claims racist graffiti has been discovered outside his campaign office as recently as Friday, and earlier this month, he says his car windows were smashed and his campaign signs were stolen as the vehicle sat in his driveway.

“Canada is a country of peace, love and brotherhood,” Uddin says. “In 20 years, I’ve never had problems like this.”

Abukar, Malik and Uddin have reported these incidents to police. On social media, Twitter users have shown their support with the hashtags “#IStandWithAusma” and “#IStandWithMunira.”

“They are being targeted because they are Muslim,” Trinity-Spadina Liberal MP Adam Vaughan told Parliament during question period on Friday. “These attacks are unacceptable. They too are an attack on democracy.”

If you have seen other instances of Islamophobic attacks against municipal election candidates, please email dotis@thestar.ca .

And Statement from Mike Layton and Joe Cressy on hate literature in Trinity-Spadina, 24 October 2014