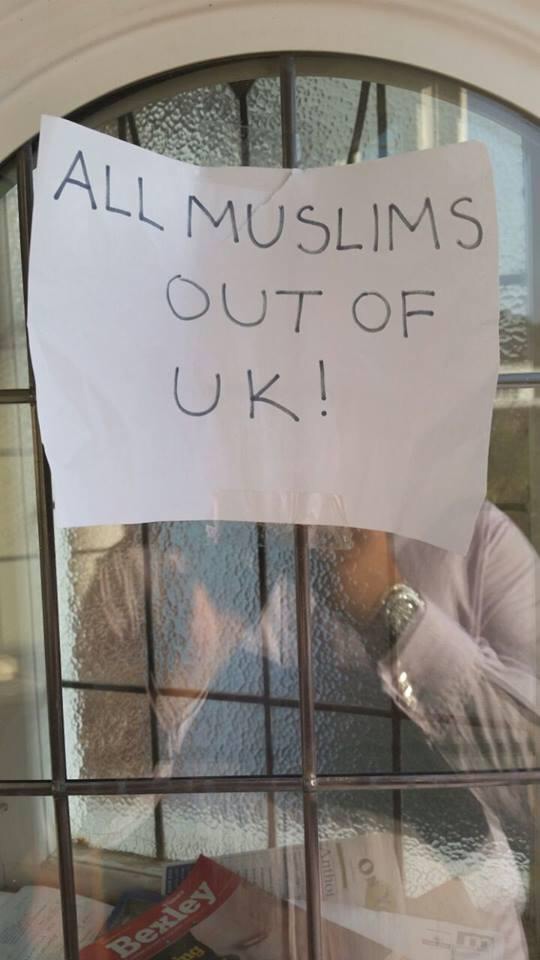 Remona Aly, whose brother Shaizir arrived at his home in south east London recently to find this notice sticky-taped to his front door, has a comment piece at the Guardian reflecting on the rising tide of Islamophobia in the UK.

Aly points out that, while spikes in anti-Muslim hate crime follow events such as Lee Rigby’s murder, the Rotherham abuse scandal and the killings by ISIS, there is “a low-level, simmering current of anti-Muslim hatred regardless”.

Aly relates the experiences of British Muslims she knows who have been spat at, had bottles thrown at them, been threatened by skinheads, accused of being terrorists, and told “you’re disgusting, go back to your own country”.

She writes: “Horrific crimes carried out in the name of religion are as much anathema to the average Muslim Briton as they are to any Briton. An additional burden for us, however, is the warped assumption that British Muslims are somehow to blame for the actions of murderers. The notion that Muslims should feel some form of collective guilt and be collectively punished is a reprehensible one, but it seems to be evident into an increasing number of people’s attitudes.”

Aly argues that repeated demand for Muslims to “apologise for crimes they played no part in”, such as the horrific murder of David Haines, “is irrational and entirely unhelpful, and in itself constitutes a form of everyday Islamophobia”. She also takes a welcome swipe at the appalling Hazel Blears, who has arrogantly called for “more integration” by British Muslims. As Aly points out: “integration is not the issue here. It is bigotry and prejudice and a language exclusive to the far right.”

Aly concludes: “I still firmly believe Britain is leading the way in Europe in its religious tolerance and inclusivity. But this could easily change. Now is not the time to get complacent about a prejudice that seems to get stronger by the day.”