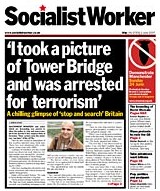 Government ministers and police chiefs are demanding new powers to allow the police to stop and search people in the streets if they suspect them of terrorism. These powers echo the notorious “sus laws” of the 1970s.

Then the laws created an atmosphere of fear as police targeted young black men. Those laws were abandoned after widespread rioting in the early 1980s.

A glimpse of what these new laws would mean was shown last week when two foreign students were arrested for “terrorism” after taking snapshots of Tower Bridge.