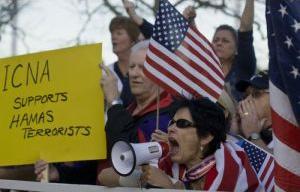 Several hundred people from as far away as Corona and the San Fernando Valley filled the lawn outside the Yorba Linda Community Center Sunday afternoon and lined Imperial Highway in response to a fundraising event by a Queens, N.Y.-based Muslim group Islamic Circle of North America Relief USA.

People started gathering about 3 p.m., two-and-a-half hours before the fundraiser began. Many in the crowd waved U.S. flags and carried signs saying, “God Bless America” and “No Sharia Law,” in reference to Islam’s sacred law. In the afternoon, the event had the atmosphere of a July 4 picnic. Many brought lawn chairs and blankets, sang patriotic songs and tied red, white and blue bandanas on their dogs.

As the fundraiser started, a splinter group of about 100 stood about 50 yards from the community center entrance and booed, yelled “go home” and chanted “no Sharia law” as attendees entered the building. Among their signs were ones that said “ICNA supports Hamas and Hezbollah.”

ICNA spokesman Syed Waqas said the protesters “should know the facts. We have no links to any overseas organization. We absolutely denounce violence and terrorism.”