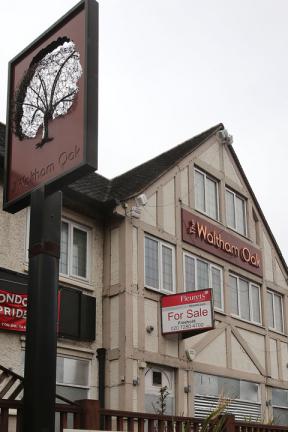 Hundreds of supporters of a bid to turn a pub building into a mosque vowed to fight a decision to refuse the proposal.

Around 200 people gathered outside a packed council chamber last night as Waltham Forest Council’s planning committee decided on the application from the Faizen-e-Islam organisation for the Waltham Oak in Lea Bridge Road, Walthamstow, which has been closed for a year.

Residents and committee members expressed concern at the loss of a landmark historical pub, which they said has been an important part of the community in that part of Walthamstow. The application was then denied on the grounds of potential disturbance to people living in sheltered housing next door and predicted parking congestion in the area at prayer times.

In emotional scenes outside the town hall, Ghulam Rabbani, Faizan-e-Islam director, announced the committee’s decision and vowed to appeal. He told the crowd: “This is the beginning of our fight. We will be fighting in a democratic and legal way. We are going for appeal. Our intention was to support the local community regardless of race, creed or colour. We are proud of our work.”

During the meeting, the refusal was backed by four committee members, including chairman, Peter Barnett, who said: “Removing a pub from that area will devastate the night time economy. I would be happy to support a mosque in another place but this is the wrong place to have a mosque.”

Speaking against the application during the meeting, resident David Gordon, 47, of Lea Bridge Road, said: “There has been a pub on that site since 1846. It would be a loss of a historical landmark.” Fellow resident Antoinette Joyce, 49, of Shernhall Street, added: “It’s been a focal meeting point in Walthamstow for many years. It would be a travesty to lose such an important landmark for the borough.”

However Tariq Mahmood, 56, a committee member at the Lea Bridge Road mosque, said the planned mosque would be inclusive and serve the whole community. He said: “The planning committee made out like mosques are just for one kind of people but its more like a community centre.  It’s biased against Muslims opening up things.”

Committee member Cllr Alan Siggers supported the application. He said: “It’s very hard to imagine how people attending this place for the purpose of their devotions would create more noise and disturbance than people coming and going from a pub.”