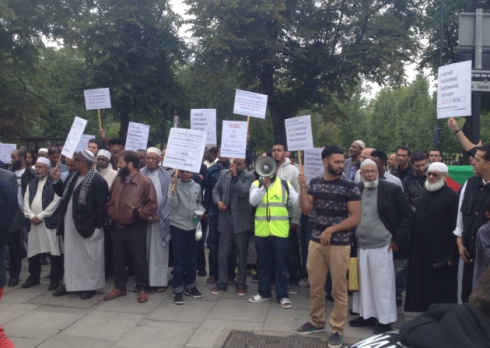 Around 300 worshippers from Finsbury Park Mosque staged a protest outside HSBC this afternoon in anger at the bank’s decision to close their account.

The demonstrators chanted “HSBC shame on you” and held placards outside the Seven Sisters Road branch at around 2.30pm.

The action came after the St Thomas’s Road mosque received a letter in July telling them their account would be shut – they say without any reason.

Khalid Oumar, secretary of the mosque’s board of trustees, said: “The protest went to plan and it was good to see people out there. At the end we delivered a petition with 1000 signatures to the bank’s senior manager.

“To be honest, it’s no longer about keeping the account. They sent us a second letter, which is worse than the first because it seeks our sympathy and understanding, telling us their decisions was not based on religion or race. But as we shouted at outside the bank ‘give us a reason’.

“They still haven’t told us why they closed the account, so we can’t learn from it, or even amend it. This is no way to deal with us and the main victims are the people who use the centre, because we’re a registered charity.”

Inspector Paul Standing, who was in charge of policing the demonstration, said: “They were very compliant and good natured. “We’d like to thank them for the way they organised and stewarded everything, it was peaceful and without incident. It was perfect from our point of view.”

A spokesman for the bank said they did not discuss individual customers but their decisions were never based on race or religion.