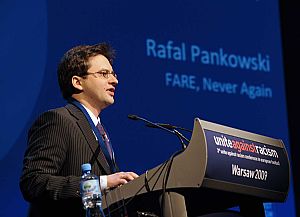 A leading Polish human rights activist warned of growing Islamophobia in his country in an exclusive interview with IRNA in Berlin.

“In general Islamophobia has become one of the big issues. I would say it is growing and I am afraid it will grow further. We see more and more talk about the so-called danger of Islam,” said the coordinator of the Warsaw-based anti-racist organization NEVER AGAIN, Rafal Pankowski. He linked the rise of “the relatively new” phenomenon of Islamophobia in his country to the global situation, particularly to Poland’s role in the US-led wars in Afghanistan and Iraq.

Pankowski said Muslims in Poland have been repeatedly the target of racial assaults, especially since the September 11, 2011 terror attacks. He added Chechen refugees in Poland have also been victimized by anti-Islam hate crime. Pankowski emphasized that the Polish media is not always covering Islamophobic attacks against Muslims. He said “more than 50 people” have died as a result of racial assaults in Poland since the early 90s when hate crimes were monitored and registered.

Pankowski also stressed there were major segments within the Polish Catholic Church who were “quite hostile to Muslims”. “Radio Maria which is a (Catholic) radio station but is also a big social movement, is a xenophobic movement. They strongly spoke out against Islam,” Pankowski pointed out.

The activist said the Polish right-wing is influenced or tries to copy the anti-Islamic rhetoric in some of the other European countries. Pankowski said the issue of Muslim migration to Poland is being exploited politically by the right-wing scene. He added that plans for the construction of a much-needed mosque in Warsaw were used “to mobilize” against Muslims in Poland.