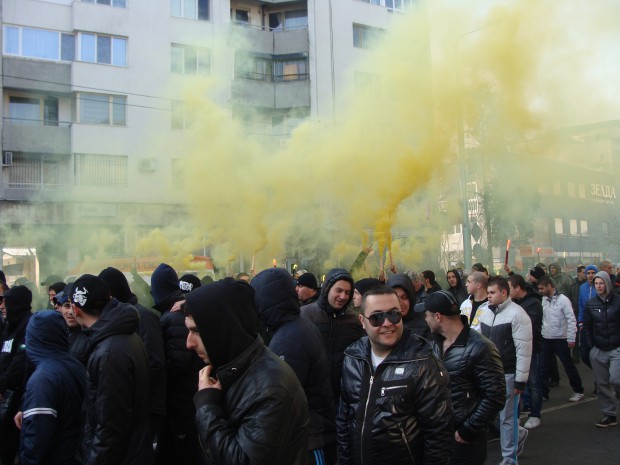 More than 1000 people from all over Bulgaria, most of them from football clubs, took part in a protest in Plovdiv against claims lodged in court on municipal property by the office of the Chief Mufti, spiritual leader of Bulgaria’s Muslims.

The claims were lodged on the basis of changes to the Religious Denominations Act. The amendments to the law extended rights to all recognised religious groups in Bulgaria to lodge such claims, a matter that has caused controversy in towns such as Karlovo where the Chief Mufti’s office lodged claims to a historic mosque building and adjoining real estate.

Emotion in Karlovo has been generated around the fact of the town’s place as the birthplace of Vassil Levski, a Bulgarian national hero for his struggle against Ottoman rule, which cost him his life. Local media said that during the protest, the court building in Bulgaria’s second city was “besieged” by the protesters while traffic in one of Plovdiv’s main boulevards was blocked and traffic police had to seal off two other roads in the city.

Protesters held posters reading, among other things, “Bulgarian land – we will not give away a single stone”, “If we lose control of Bulgaria, we lose everything”, “Stop the Islamicisation of Bulgaria” and “Down with the MRF”, the last being a reference to the Movement for Rights and Freedoms, a party led and supported mainly by Bulgarians of ethnic Turkish descent and the Muslim faith and also a party in the country’s current ruling axis.

Reporters in Plovdiv quoted protest organiser Elena Vatashka as saying that it was “unacceptable that a country like Bulgaria, a member state of the European Union, could allow the Chief Mufti to own land. The court should take account of public opinion but not of political parties, she said.

During the protest, a woman was seen wearing a headscarf was pursued by part of the crowd. She managed to find refuge by hiding in an art gallery, reports said.

The properties at issue in Plovdiv include three houses and land at an Ottoman-era cemetery.

Reporters noted that participants in the protest included the fan clubs of Plovdiv’s two major rival football teams, although they did not wear their club insignia, saying that they were united in their objection to the Chief Mufti’s court claims. Also present were fans, respectively, of Sofia’s two major football rivals, CSKA and Levski. The football fans insisted to reporters that no political party was involved in the protest.

During the protest, football fans threw fireworks in the streets. There was a large police presence, local media said.

Lawyer for the Chief Mufti’s office, Krassimir Rouev, said that the properties that were subject to the claims had been illegally nationalised for more than 50 years, but on the basis of two laws – the 1992 statute on land restituion and the amended 2002 Religion Denominations Act – the unconditional return of seized property was possible.

Lawyers for Plovdiv municipality have countered that the Chief Mufti has no evidence of ownership of the properties and also is not the legal successor to the Muslim religious communities of the time.