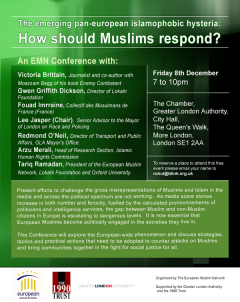 The emerging pan-European Islamophobic hysteria: how should Muslims respond?

An EMN Conference with:

Present efforts to challenge the gross misrepresentations of Muslims and Islam in the media and across the political spectrum are not working. As media scare stories increase in both number and ferocity, fuelled by the calculated pronouncements of politicians and intelligence services, the gap between Muslim and non-Muslim citizens in Europe escalating to dangerous levels. It is now essential that European Muslims become politically engaged in the societies they live in.

This Conference will explore the European-wide phenomenon and discuss strategies, tactics and practical actions that need to be adopted to counter attacks on Muslims and bring communities together in the fight for social justice for all.

This event is organised by the European Muslim Network and supported by the Greater London Authority and the 1990 Trust.

Booking:  To reserve a place to attend this FREE event, please email your name to ruhul@blink.org.uk