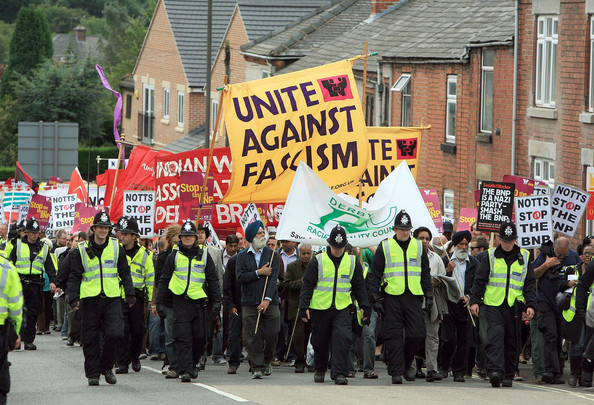 On 18 August we posted a piece entitled “Quilliam accuses anti-BNP protestors of ‘thuggery and hooliganism’“, which criticised an article by Lucy James of the Quilliam Foundation that had appeared on the Progress Magazine website.

Our criticisms provoked a hostile reaction from one of the Harry’s Place wannabees who run a blog rejoicing in the name of the Spittoon, where we were accused of producing “an amateurish bit of slime” against Lucy James. I hadn’t intended to post on it here, but as the Spittoon piece is being punted around as a “comprehensive rebuttal” of our article, I think it’s necessary to place an answer on record.

In connection with the protest outside the BNP’s Red White and Blue festival at Codnor on 15 August, in which Unite Against Fascism played a leading organisational role, we condemned Lucy James for publishing the following slur against the anti-fascists who joined the demonstration:

According to the Spittoon, this misrepresents James’s argument, because we failed to quote the sentence after that, which referred to the violent clashes in Birmingham on 8 August that resulted from an anti-Muslim demonstration organised by the English Defence League.

But in any case, even if you accept the Spittoon’s dubious claim that this accusation referred exclusively to the events in Birmingham, nobody can dispute that James’s statement, “these anti-BNP protesters soon became violent”, was directed specifically against the almost entirely peaceful anti-fascist protest at Codnor.

James went on to assert, in connection with the “thuggery and hooliganism” in Birmingham, that “violent clashes erupted between the English Defence League and Unite Against Fascism”.

But this is just as misleading as her account of Codnor. What happened in Birmingham was that Unite Against Fascism organised a non-violent demonstration at the Bullring, with Respect councillor Salma Yaqoob among those who addressed the crowd. You can watch a video of the events here, and listen to a speaker at the UAF rally urging people to remain calm and peaceful.

What then happened, to quote the maker of the video, was that “the EDL members that avoided being ‘kettled’ by police went straight for the anti-fascist protest, goaded the Birmingham youth, then got beaten and chased out of town”.

No broad-based anti-fascist campaign can advocate or support such actions, even against the far right – and UAF did neither. But any anti-fascist with a shred of political integrity would place the blame for the violent clashes unequivocally on the provocative, racist behaviour of the EDL supporters.

As Salma Yaqoob pointed out at a public meeting in Birmingham on 23 August, called to address the community’s response to another EDL provocation due to take place on 5 September, the reality is that “today’s Muslim youngsters … won’t put their heads down and carry on walking when they are subjected to racist taunts – they will react and fight back”.

On that basis Salma backed the widely-supported call for the police to apply to the Home Office to impose a ban on the forthcoming EDL demonstration, as has already been done in Luton. Her aim, and that of other supporters of UAF in Birmingham, has been to prevent violence, not encourage it.

It is clear that James’s intention is to smear UAF, without any concern for honesty or accuracy, as a violent organisation. This is a disgraceful attack on a mainstream anti-fascist campaign which receives substantial support from the trade unions – support that would undoubtedly be withdrawn if James’s false accusations were to be given any credence.

But then, UAF has a record of doing joint anti-fascist work with the Muslim Council of Britain, who have been denounced by Quilliam’s Ed Husain for supposedly “masquerading as moderate Muslims” while promoting the writings of “the godfathers of al-Qaeda ideology”. So you can understand why Quilliam would be keen to discredit UAF, even at the expense of undermining organised resistance to the BNP.

In short, Quilliam appears intent on importing into the anti-fascist movement the same slanderous, divisive, disruptive methods that have characterised their approach to the Muslim community and its representative organisations. And, what is worse, they are reportedly pursuing this destructive agenda with the assistance of large sums of taxpayers’ money.