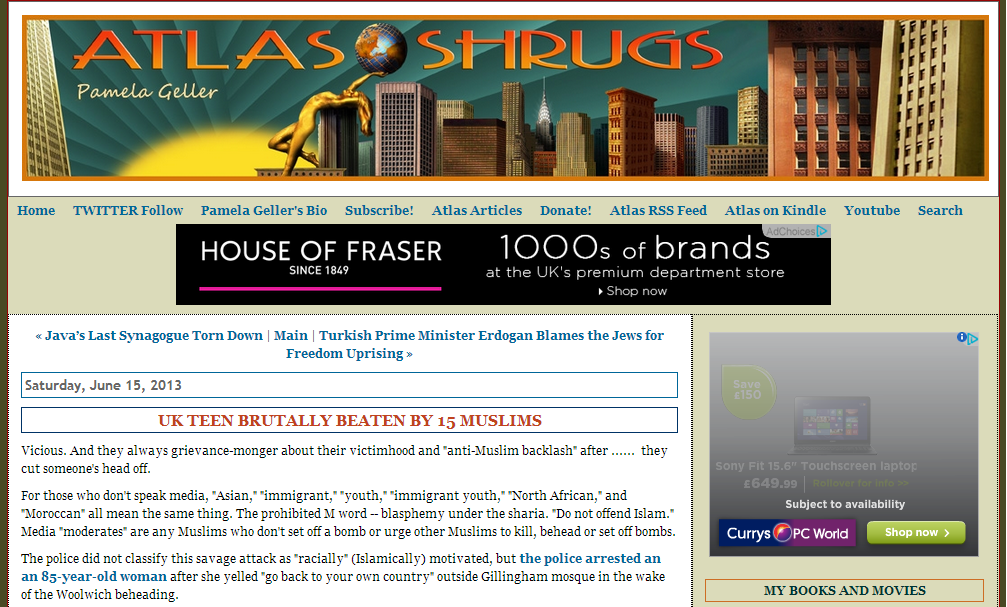 A week ago Geller reproduced a report from the Dewsbury newspaper The Press, detailing an alleged attack by a group of youth of Asian heritage on a 14-year-old white boy, Joseph Haigh, in the West Yorkshire village of Thornhill, which was said to have taken place “on Friday night”. She told her readers: “The police did not classify this savage attack as ‘racially’ (Islamically) motivated, but the police arrested an 85-year-old woman after she yelled ‘go back to your own country’ outside Gillingham mosque in the wake of the Woolwich beheading.”

From which we can only conclude that Geller believes that yelling “go back to your own country” at Muslims is acceptable behaviour and that her co-thinkers in the UK should be free to shout such racist abuse without fear of arrest.

Geller takes exception to The Press describing the alleged assailants as “Asian”. She complains: “For those who don’t speak media, ‘Asian’, ‘immigrant’, ‘youth’, ‘immigrant youth’, ‘North African’, and ‘Moroccan’ all mean the same thing. The prohibited M word – blasphemy under the sharia. ‘Do not offend Islam’.”

The charge against The Press that its reporting is motivated by a politically correct concern to avoid offending Islam is particularly bizarre, given the record of that newspaper.

Its editor and reporter Danny Lockwood is a notorious Islamophobe, who was the object of a protest by the local Muslim community after he published an article in The Press claiming that if the Cumbrian mass-murderer Derrick Bird had been carrying a Qur’an “he would have been celebrated as a hero by tens of thousands – possibly more – of so-called ‘British’ muslims”. Lockwood is also the author of a piece of right-wing scaremongering entitled The Islamic Republic of Dewsbury, which was warmly recommended by the Dewsbury division of the EDL. Indeed, Lockwood’s history of links to the far right, including the British National Party, was outlined by Hope Not Hate at the time.

As Exposing… points out, Geller also failed to notice that The Press report she had republished dates from 2009. If the police were initially hesitant to classify the attack as racially motivated, as the report claims, this was probably because Joseph Haigh’s bicycle was stolen and it seemed possible that the actual motive was theft. However, seven youth of Asian heritage were subsequently charged with causing racially aggravated grievous bodily harm (as Lockwood reported at the time, even if he couldn’t spell it properly). The case collapsed in November 2010 after a key witness was unable to give evidence.

Not only was Geller’s story taken from a dubious source, and falsely presented as a recent case, but the report she reproduced has since been removed from The Press website (though it can still be found in Google cache), possibly because Lockwood was worried it could be construed as libellous, given that the youth accused of carrying out the attack were acquitted. Geller had simply jumped on a story that seemed to offer the opportunity for stirring up anti-Muslim hatred, and she hadn’t bothered to check the source or make any attempt to establish the facts of the case.

Geller’s Atlas Shrugs post provided inspiration to her friends in the EDL, for whom it offered further evidence to reinforce their paranoid racist fantasy about a so-called “two-tier system”, whereby the authorities persecute honest “patriots” like themselves while refusing to take action against criminals within the Muslim community.

As Exposing… shows, the EDL’s Northampton Division posted the story under the screaming headline: “Yet ANOTHER Muslim Murder attempt on a British lad!! FRESH ATTACK!! British Teen badly hurt in ‘racist’ attack…Police REFUSE to act…AGAIN!”

The EDL added their own further distortions to the story. The photo of Joseph Haigh that Geller used to illustrate her Atlas Shrugs post had disappeared when The Press report was deleted, so the EDL added its own illustration, which turned out to be a photo of 11-year-old Calvin Lock after he suffered an allergic reaction to the drug Ibuprofen.

The EDL also misread Geller’s reference to the arrest of a woman for allegedly shouting racist abuse at Muslims outside Gillingham mosque and claimed that the attack on Joseph Haigh had itself taken place in the Kent town. 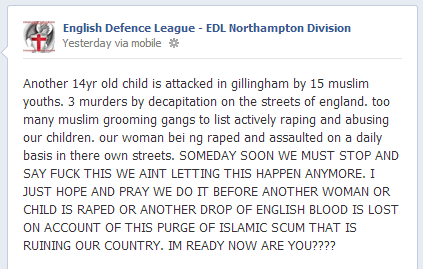 Of course, it would be unfair to blame Geller for the monumental stupidity of the EDL. But this is a woman who not only defends the shouting of racist abuse at peaceful Muslim worshippers but also incites anti-Muslim hatred among her UK supporters by publishing inflammatory articles without the slightest concern for factual accuracy.

There seems no reason why home secretary Theresa May should fail to heed calls for Geller and her fellow hate-monger Robert Spencer to be barred from entry to the UK.