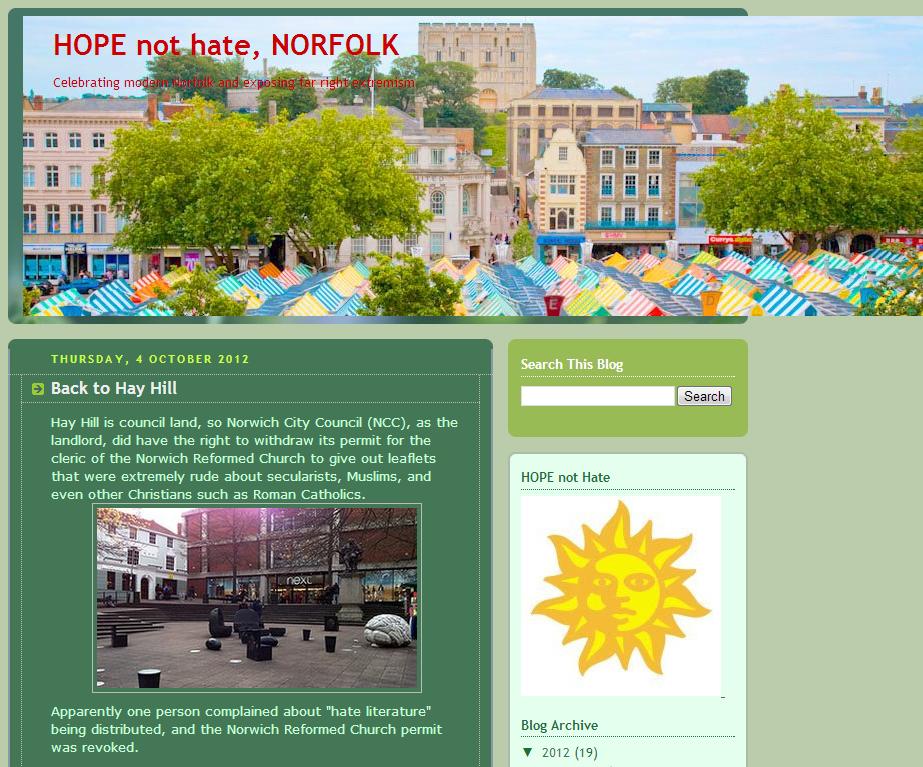 The Reverend Alan Clifford of Norwich Reformed Church first came to prominence back in 2004 when the local paper published a front-page article under the headline “I Think Islam Is Evil, Says Pastor”, with the subheading “Church leader backs BNP view on faith”.

The story concerned a letter Clifford had written to the Norwich Evening News declaring his support for the views on Islam expressed by Nick Griffin. The British National Party leader had been exposed in a BBC TV documentary which showed him telling a party meeting that Islam is a “wicked, vicious faith” and accusing Muslims of raping white girls as “part of their plan for conquering countries”. In his letter Clifford said that Islam was indeed an “evil religion” and that Griffin had been correct to describe it as “a monster in our midst”.

Clifford again attracted publicity earlier this year when Norwich council withdrew permission for Norwich Reformed Church to hold its stall at a site on Hay Hill owned by the local authority, and also banned them from holding further meetings on its premises. The council’s action was prompted by a complaint that the church was distributing anti-Muslim hate literature from its stall.

Specifically, the objection was to a leaflet by Clifford titled “Why Not Islam”. This accuses religious and political leaders of being “gripped by cowardice in the face the Muslim menace”, condemns governments for “ignorantly distinguishing between militant and moderate Islam”, and warns that “seemingly-benign Muslim communities will always be breeding grounds from which their more militant members can recruit jihadists”.

Clifford was immediately hailed as a hero by the BNP and the English Defence League, both of which fully supported his views on Islam and denounced Norwich council for attempting to suppress them. The EDL provided a link to “Why Not Islam” on its Facebook page, while the BNP reproduced the full text on its website. The EDL also announced that it would hold a national demonstration in solidarity with Clifford, which is now set for 10 November. Clifford, for his part, has stated that the EDL have “rightly” endorsed his attack on Islam.

It should be obvious that the right to free speech does not include the right to incite hatred against minority ethno-religious communities, and anti-racists and anti-fascists would be the first to support Norwich council’s firm action on this issue.

Or so you might think. However, Hope not hate Norfolk have come out strongly against the council’s decision. An article posted on their website by one Barbara Suzuki on behalf of the “HNH Norfolk Team” poses the questions: “Did Norwich City Council act too quickly against a soft target? Did the NCC consider the wider issues? Is this an attack on Free Speech?”

According to HNH Norfolk, Norwich council was indeed at fault in withdrawing permission for Clifford and his friends to distribute anti-Muslim hate literature on local authority property: “Not only has the NCC been ridiculed and criticised, it has also handed on a silver platter an excuse for a rag-tag rabble like the EDL to propose a march on the City on November 10.”

So Norwich Council is apparently to blame for provoking the EDL by launching an unwarranted attack on the Rev Clifford’s right to free speech. Moreover, as evidence of the “ridicule and criticism” to which Norwich council has been subjected, Suzuki provides us with a link to the right-wing Cranmer blog.

As for Clifford’s hate-filled publication, HNH Norfolk can’t understand what all the fuss is about. “Why anyone would want to make a complaint about it beats me”, Suzuki writes. “There is literally no limit to the number of things that give offence to someone or other, and are we then to complain to the council about each and every one of them? Is this the way grown-ups in a secular democracy behave?”

The explanation for this disgraceful position can be found on Suzuki’s Facebook page, which shows that she is an active supporter of the National Secular Society, an organisation that staunchly defends the right of racists to attack Islam – not least because a number of prominent NSS members share their views.

The NSS has long promoted the so-called “comedian” Pat Condell, who is given to posting YouTube rants against “Muslim immigrant rapists”. NSS president Terry Sanderson once applauded a Sunday Telegraph columnist who denounced a ban on incitement to religious hatred on the grounds that it was being proposed “at the behest of Muslim foreigners who have forced themselves on us”. Sanderson himself has expressed his concern that “immigrants are importing their own brands of religion into Britain” which are “primitive, hysterical, fanatical and alien”.

So it’s not exactly surprising that Suzuki should uphold Alan Clifford’s democratic right to incite hatred against Muslims. What is disturbing, however, is that she has been allowed to publish these views on the website of a leading anti-racist and anti-fascist organisation which receives generous financial backing from the trade unions.

Meanwhile, in east London, the Jewish community has reacted angrily to the appearance of a clearly racist mural featuring antisemitic caricatures of scheming Jewish bankers. Quite rightly, Tower Hamlets mayor Lutfur Rahman has strongly supported the Jewish community on this issue, issuing a forthright condemnation of the mural and demanding its removal. As the mayor has stated: “Where freedom of expression runs the risk of inciting racial hatred then it is right that such expression should be curtailed.”

It’s just as well for the Jewish community that the antisemitic mural appeared in Tower Hamlets rather than Norwich, otherwise they would no doubt have faced a campaign by Hope not hate Norfolk to defend the democratic right of antisemites to incite hatred against Jews.

Update:  Suzuki has now posted a clarification on the Hope not hate Norfolk blog in response to a question concerning its relationship with HNH. She states that the blog “consists of my personal thoughts”. In which case she should change its title, because as things stand her “personal thoughts” are publicly associated with HNH and appear in the name of the “HNH Norfolk Team”. Anyone reading the blog would naturally assume that the views Suzuki is expressing represent those of the Hope not hate organisation in Norfolk. 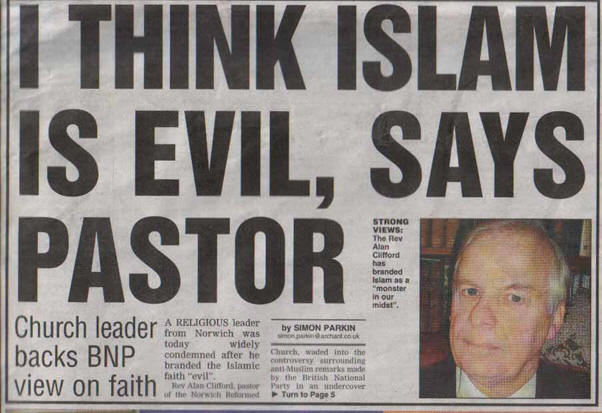