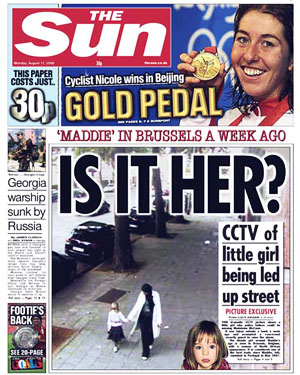 A little girl who cops suspect could be Madeleine McCann asked a woman she was seen walking with, “Can we go back now?” it emerged last night.

The poignant plea in English was overheard by a bank security guard in Brussels, Belgium – and he is convinced the kiddie was missing Maddie.

The guard told detectives the blonde blue-eyed girl looked just like Maddie, who was nearly four when she vanished from her family’s holiday apartment in Portugal on May 3 last year.

She was with a woman the man did not believe was her mother because they were very unalike. The dark-skinned woman, wearing a hijab headdress, spoke in a different language, possibly broken French.