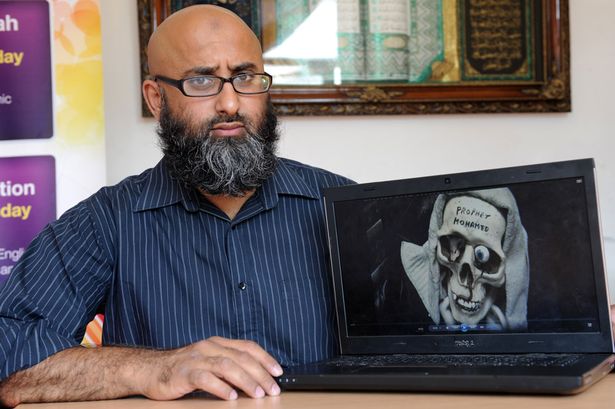 The mosque visited by a terror suspect who evaded police by wearing a burka has received a second hate DVD. It arrived through the post the morning after the mosque held an open evening for the public to learn more about Islam to help dispel fears that the faith nurtured extremists and terrorists.

Abdul Maalik Tailor, an interfaith outreach worker at the An-Noor mosque, said the open evening on Monday had an exhibition about Islam and that women who wore the face veil were there to answer any questions.

But on Tuesday morning the mosque in Church Road, Acton, received a second copy of a DVD it was sent in August. It contains footage of a fake skull with the words “Prophet Mohamed” scrawled across. Offensive words are held underneath it before it is cut with scenes from a pornographic film and a BBC Newsnight report about a banned extremist group.

Mr Tailor said: “The evening was to show people who we really are. We’re not a threat to society. People really liked it. To be sent the DVD again is upsetting. All we can do is keep trying and we’re planning to have more open days. This just shows we have more work to do.”

The latest DVD is thought to be directly linked to the fugitive Mohammed Ahmed Mohamed because it came with a postcard which attacked Islam and said: “Beware of men who wear skirts and women’s clothes.”

Mohamed is suspected of being associated with militant group al-Shabab, responsible for the attack on the Westgate Mall in the Kenyan capital Nairobi. The 27-year-old who is subject to a terrorism prevention and investigation measure, escaped surveillance by wearing a burka when he left the mosque on November 1.

The envelope was addressed to “His Wonderous (sic) Cleric of Islam” and stamped with an east London postmark.