Over at Harry’s Place Hasan Afzal of British Muslims for Israel is crowing over the success of their campaign to secure the cancellation of next month’s “Month of Mercy” conference at the Grand Connaught Rooms in London organised by the Al Muntada Trust.

As we have previously noted, the “call to action” issued by Harry’s Place received an enthusiastic response from the racist thugs of the English Defence League and the associated hooligan group Casuals United.

Unsurprisingly, both the EDL and Casuals United share HP’s glee over the cancellation. 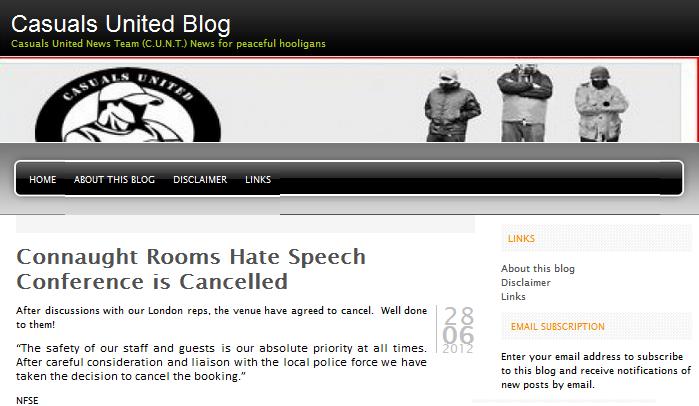 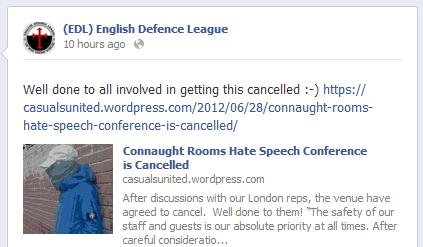 It is interesting that Hasan Afzal makes no mention of the reason given by the Principal Hayley Group, the hotel operator responsible for the venue, for cancelling the booking. We are left to assume that it was the dangerous “jihadist” ideology of the Al Muntada Trust that led to the decision.

However, as you can see from the Casuals United screenshot, the explanation given by the venue operator was as follows: “The safety of our staff and guests is our absolute priority at all times. After careful consideration and liaison with the local police force we have taken the decision to cancel the booking.”

I had emailed the Principal Hayley Group myself, urging them to reject calls to cancel the conference, pointing out that the people behind the campaign were extremists like the EDL and Harry’s Place. This morning I received the same email quoted by Casuals United.

I emailed back saying that I couldn’t understand how a conference organised by an entirely peaceful body like the Al Muntada Trust could have compromised the safety of staff and guests at the Grand Connaught Rooms. I received the following explanation: “We cancelled the event due to the risk of public disorder, damage to our property and safety of our staff. This decision was made on Police advice.”

So it wasn’t the supposed “jihadist” ideology of the conference organisers that caused the cancellation of the booking – it was the threat of violence from opponents of the conference. In other words, Harry’s Place managed to get the conference cancelled by mobilising far-right racist thugs against it. They must be really pleased with themselves.